Oom the Mighty is an alien supervillain and serial killer in the DC Comics universe. He is an enemy of the original Spectre (Jim Corrigan), the All-Star Squadron, and Captain Marvel. Oom was also a member of Mister Mind's Monster Society of Evil for a couple of times. He is from an alternate universe called Earth-Two (although this would change many years later and instead be Earth-Five).

Oom the Mighty would make his first appearance in 1940, in which he escaped his imprisonment and arrived on Earth. There, he proceeded to commit a series of gruesome murders which resulted in New York police detective Jim Corrigan being assigned to investigate the case. Jim would discover Oom posing as bronze statue on the side of the Central Building from New York. Once Oom was seen by Jim, Oom attacked him which caused Jim to change his appearance to his superhero persona, the Spectre. Oom then challenged the Spectre, the contest being whoever could find the legendary Red Moon Stone of Yzgartyl first will have earned the right to remain on Earth. The loser, however, would have to agree to leave the planet forever.

Oom and the Spectre then travel throughout outer-space, with both of them trying to find and get the Moon Stone first. Oom tried to hinder the Spectre by manipulating one of Yzgartyl's henchman to his advantage. This underling was a large brown space-dragon, in which he battled the Spectre while Oom takes this chance to search for the Moon Stone. However, despite the major advantage for Oom, the Spectre succeeded in getting the stone away from Oom and went back to Earth. Despite that the Spectre had won the contest, Oom refused to go back to his imprisonment. The Spectre then used his powers to extract Oom's soul and trapped it inside of the Moon Stone and then hurled it deep into space.

Oom would eventually return from outer space in 1942 as a member of Mister Mind's Monster Society. They tried to take over the Earth and would come into conflict with the All-Star Squadron. Oom and the rest of the villains would be defeated and Mister Mind would retreat back to Earth-S, leaving his team behind. Oom would once again be part of the Monster Society of Evil, but this time it was much larger and more powerful. Once again, they would try to take over the Earth but would be impeded by Captain Marvel. Their battle against him lasted for almost two years before they were defeated with Mister Mind being executed, via the electric chair, for his war-crimes (although it was later revealed he survived due to his alien species being immune to electric shock).

The Monster Society of Evil is featured in Batman: The Brave and the Bold. In the episode "Mayhem of the Music Meister!", Music Meister puts Batman and Black Canary in a death trap where on the walls are names of various DC Comics teams including the Monster Society of Evil. In this version, Oom is a murderer from the planet Yzgartyl. He was eventually arrested and imprisoned on the dark side of the Moon for 1000 years. Oom eventually escaped and began another crime spree on the nearby planet Earth. He later joined the Monster Society of Evil in Fawcett City. Oom would appear in the episode "The Malicious Mr. Mind!". He is a member of the Monster Society of Evil alongsider Mister Mind, Doctor Sivana, Mister Atom, Kru'll the Eternal, Ibac, Jeepers, and an unnamed Crocodile-Man (presumably Herkimer). When it came to fighting Batman and the Marvel Family, Mr. Mind goes inside the minds of the Marvel Family members, making them turn against each other. When Doctor Sivana tries to eliminate Mister Mind with the death ray he was constructing, it ends up turning Mister Mind into a giant insectoid creature (similar to his Hyperfly form) as he reveals that he reprogrammed the ray to become a growth ray while telling Sivana he was improving the death ray. The infant Batman manages to fire the growth ray on Mister Mind reducing him back to normal size. Then the Growth Ray is used to restore Batman to his rightful age. 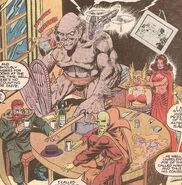 Oom and other members of the Monster Society of Evil in Batman: The Brave and The Bold

Oom with other supervillains

Retrieved from "https://villains.fandom.com/wiki/Oom_the_Mighty?oldid=3325162"
Community content is available under CC-BY-SA unless otherwise noted.