Although she is highly intelligent, Opal was delusional in the belief of her own superiority. She was extremely narcissistic and considered herself perfect and deserving of world domination. She was vain, arrogant and short-tempered, and expected total obedience from her subordinates.

Opal was extremely intelligent from a young age. She resented her father who had low expectations of her and eventually built her own tech company, Koboi Industries, to put him out of business. During her youth, she attended college where she competed with the tech genius Foaly, whom she resented for the rest of her life.

Her tech company built many inventions, such as the Hummingbird Wing design, which she sold to the Lower Elements Police and became extremely successful. During the Spelltropy outbreak, she discovered a cure and wanted to charge high prices for it, but the government took it from her. However, the government and the LEP were unaware that she was experimenting on exotic animals in order to increase her power.

Opal joined forces with a disgraced LEP officer named Briar Cudgeon. She provided the tech for lethal weaponry for the goblins while she also took control of all of the LEPs tech. She hoped to get revenge on Foaly as well as take control of Haven. However, she found out that Cudgeon was planning on betraying her and turned against him. Their plans were foiled by Artemis Fowl, Julius Root, Foaly, Butler, and Holly Short. Cudgeon was killed and she was arrested.

To escape prosecution, Opal used meditation to fake a coma and ended up in a Psychiatric hospital. There she had two minions, Mervall and Descant Brill, who helped her escape, by replacing her with a clone. She had a human pituitary gland implanted in her brain so she could masquerade as a human. She used the mesmer on a scientist called Giovanni Zito to control him to be his daughter. She then tricked Holly Short and Julius Root by murdering Root and making it look as though Holly was guilty. Opal then tried to kill Artemis and Butler but Holly, after escaping, managed to save Artemis. Holly managed to capture Artemis and Holly and tried to have them killed in a park full of trolls, but they escaped. Opal continued with her plan, supplying Zito with a probe that would destroy most of Haven and expose the rest. However, Artemis and his friends managed to stop her and inform of LEP of her plan. She initially managed to escape, but got trapped on a potato farm and was eventually captured by the LEP.

Artemis went back in time in order to cure his mother of Spelltropy. The cure was in the brain of the extinct Silky Sifaka Lemur, which past Artemis sold to a group called the Extinctionists. Little did Artemis know that past Opal was controlling the Extinctionists in order to gather exotic animals to gain advanced magical abilities. Artemis managed to steal the lemur from her, so she went forward in time to make it seem as though Artemis's mother had Spelltropy, forcing him to bring her the lemur. In the present, she disguised herself as a nurse and took control of Artemis's mother. Artemis, along with his past self, figured out her plan and managed to get the lemur away from her. She chased him, but he blew up a Kraken, which was disguised as an island that she was standing on. Past Opal was injured and trapped in the present, but managed to escape from the LEP.

Past Opal contacted the present Opal for help. Present Opal tricked past Opal and had her killed. This caused the timelines to split, and everything created by Opal exploded. Most of the technology both on Earth and under it ceased to work. Opal herself went into nuclear fission and used the energy to escape from prison and open the first Berserker gate, which was at Fowl Manor. This released the Berserker souls, which she took under her control to use as soldiers. She attempted to open the second Berserker gate, which would wipe out all of humanity. Artemis and his friends managed to arrive at Fowl Manor in order to stop her. She had the Berserkers, led by Oro, try to kill Artemis and his friends but they evaded her. However, when they couldn't stop her, Artemis pretended to surrender along with Holly. However, instead of Holly, it was actually Opal's clone, which Artemis used to close the second gate. Opal was enraged and declared that she had and would continue to kill fairies in order to achieve her goals, so Oro the Berserker killed her.

Opal was extremely intelligent and was able to create many useful inventions. She also was able to use her intelligence to concoct many schemes for world domination.

Opal had magical abilities, such as healing and the mesmer. However, she lost those when she implanted a human pituitary gland. Past Opal, using fluids from endangered animals, had enormous power, such as levitation, thunderbolts, mind control, shapeshifting, and time travel. After she killed her past self, she regained many of these abilities. 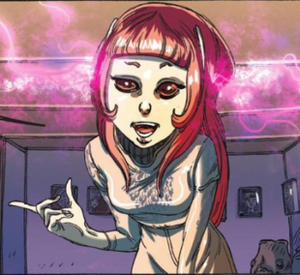 Retrieved from "https://villains.fandom.com/wiki/Opal_Koboi?oldid=3806586"
Community content is available under CC-BY-SA unless otherwise noted.