Trying to avoid too much hard work.

Orbot, formerly known as SA-55, is a major antagonist in the Sonic the Hedgehog franchise and one of two secondary antagonists of Sonic Colors and the Sonic Boom TV show.

Orbot is a round-like robot who is the programmed henchman and right-hand assistant of Dr. Eggman, alongside Cubot. He, most of the time, is a nuisance to Eggman and seems to get in the way.

He appears as one of the two secondary antagonists (alongside Cubot) of Sonic Colors, Sonic Colors: Rise of the Wisps and the Sonic Boom TV show, a minor character in Sonic Generations, Team Sonic Racing and Sonic Dash 2: Sonic Boom, a supporting antagonist in Sonic Forces and Sonic Lost World, and a major antagonist in the IDW Sonic the Hedgehog comics.

He was voiced by Kirk Thornton.

Orbot, one of two secondary antagonists in the game, first truly appears in Sonic Colors, working with his new sidekick, Cubot. Orbot is less sarcastic this time around and actually seems to appreciate Cubot to an extent. Outside of Eggman's base, they are only seen in Tropical Resort, chasing aliens and picking up debris and in the ending cutscene, in space. During the game, he tries to find the correct voice chip for Cubot, who changes his voices often, much to the annoyance of Dr. Eggman. After Eggman's defeat, he, Orbot and Cubot are sucked into a black hole. In the ending cutscene of the game, Orbot and Cubot are pushing the broken Egg Mobile in space, with the doctor talking about his new plan to take control of the world.

While Orbot never makes an actual appearance, in a flashback, Dr. Eggman abandons him and Cubot in space so he can use Time Eater to change history.

Orbot reappears as a neutral character in the game with a larger role. After the Deadly Six hijack Eggmans Badniks, Orbot along with his creator and his partner, teams up with Sonic to defeat the Zeti. Orbot doesn't serve an important role in the story and mostly serves as a comic relief character. After Cubot's body is destroyed by the Zeti, Orbot goes for the rest of the game with his head attached to his body. When their party is assaulted by the Deadly Six while crossing the bridge, the robots fall into lava but are saved by Eggman and accompany him in his battle against Sonic. In the post-credits scene, they find Dr. Eggman after he had fallen off the Lost Hex with half of his mustache chopped off. Orbot tries to hide the fact from the doctor at least until he separates Cubot's head from him, but he ends up discovering it anyway.

Orbot has an extremely minor role in this game and only has about 3-4 lines of dialogue. He again mostly serves as comic relief and doesn't have any real plot relevance.

Orbot plays a minor role in Team Sonic Racing, as he and Cubot were left behind on Final Fortress to operate it. He occasionally communicates with Eggman as he prepares his Death Egg.

Orbot is a major antagonist in the TV series and appears in nearly all of its episodes, alongside Cubot.

Orbot is a central character in the following Sonic Boom episodes: 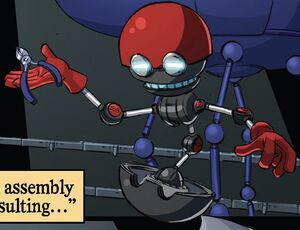 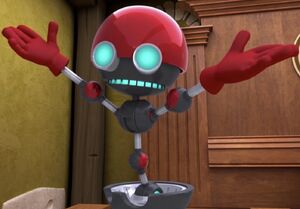