Villains Wiki
Register
Don't have an account?
Sign In
Advertisement
in: Spoilers, Animator vs Animation Villains, Chopsocky Villains,
and 18 more

Orbs created by the Original Orb

There was one Orb spawning Lucky Blocks. After Yellow uses it to spawn many useful items for its friends and itself, it possesses Yellow and creates four more Orbs, all bent on causing chaos.

After Yellow tampers with a Lucky Block, it enters the dimension in which the Lucky Blocks take things. It finds the Orb that spawns all those things. It takes the Orb out of the dimension and uses it to spawn goods for its friends. Suddenly, the Orb possesses Yellow and starts attacking the Stick Figures. Meanwhile, Yellow's "soul" enters the Lucky Block Dimension to spawn things that help its friends. Suddenly, the Orb grabs Blue and shoots a laser at its head. Blue is now possessed by a second Orb. The two Orbs fight the team until Green and the Second Coming are possessed as well. The souls of its friends help Red in defeating the Orbs, but to no avail. Red spawns a pig seconds before being possessed as well. The souls of the Stick Figures all make the pig powerful and make it attack the original Orb that possessed Yellow. The pig, after a fight, hits Yellow so hard the Orb flies all the way back to the Lucky Block Dimension. With the Orb back where it belongs, the other four Orbs are destroyed and all damage is fixed. While the Fighting Stick Figures celebrate their victory, the Second Coming finds a Green Lucky Block and everyone escapes in fear.

The Orbs have no personality besides wanting to cause as much chaos as possible. 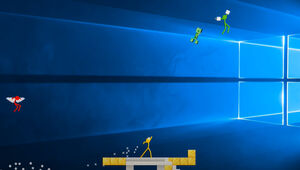 The Orb attacking the Stick Figures. 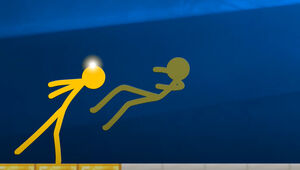 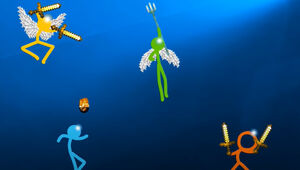 Every possessed stick figure besides Red. 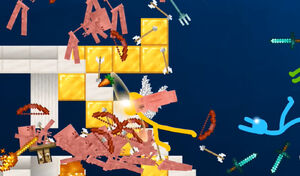 The Orb is about to be defeated. 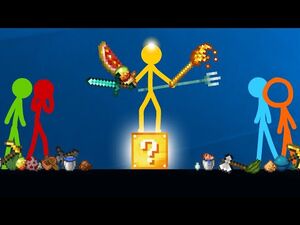