Kill Captain Nolan to pay for the death of his mate and child (succeeded).

Orca, also nicknamed "Orca the Killer Whale", is the titular protagonist villain of the 1977 horror adventure film of the same name. He is a large killer whale who kills and eats people.

Orca was a father-to-be. However, after the Orca killed a great white shark, onlooker Captain Nolan decided to capture him, but accidentally killed his mate instead and inadvertently made her miscarry.

Orca showed himself to be able to formulate vengeance as he sought an act of terrible revenge on those that had killed his mate. He eventually killed Nolan by catapulting him against an iceberg. With his vengeance complete, the Orca leaves, his fate unknown.

The story of Orca is generally considered to be a repeat of Jaws as it was one of the natural horror films that were launched after the success of Jaws in 1975 but it also has some elements of Moby Dick in it as well (such as an abnormally aggressive whale and the idea of revenge). Indeed it is arguable if he really is evil, while he kills innocent people, his target and intention is Captain Nolan, and he is an animal. Mostly it was all due to a misunderstanding.

Measuring around 30 feet long, Orca the Killer Whale is a large male killer whale with a tall dorsal which is now missing a small piece from an arrow shot by Captain Nolan. Along with the original sounds a real killer whale makes, Orca was given the voice to roar, bellow, and growl to make him sound more scary and evil.

Orca was portrayed as an extremely dangerous whale with an aggressive personality to show how evil he was on a fisherman named Captain Nolan. After the death of his mate, Orca goes on an aggressive rampage for revenge and would kill any of Nolan's crew no matter how responsible they were for the death of the female. In the beginning, Orca showed sadness after his mate had a miscarriage by roaring and he pushes the body of the female orca where it lays to rest.

Orca was seen in the beginning jumping in the open and swimming happily with his mate. Both orcas enjoyed each other and perform a romantic courtship. A crew on a fishing boat lead by Captain Nolan are out at sea to capture a great white shark. The great white was spotted when it approached a diver who fell from his speed boat and frantically tried to swim back to the boat. Before the shark can reach the diver, Orca's mate comes up and attacks the shark which stuns Nolan and wonders who it was that killed the shark.

The next day, Nolan and the crew spot a pod of killer whales swimming on the horizon and plans to capture a bull orca. Nolan fires the spear but only passed Orca's fin breaking a piece and strikes the female. The female whale yells in pain and swims towards the boat and shreds herself on the propeller. Orca swims close to the boat as his mate is pulled aboard. As the whale watches, the mate cries in pain from her injuries and then has a miscarriage. Orca roars in shock and Nolan is horrified after the dead embryo comes out and lands on the deck. Orca bellows in sadness and anger as he witnesses the death of his child. The fetus is hosed off and Orca approaches closer to the boat and lets out a bellow before disappearing in the water. At night, Orca rams underneath the boat's hull to free his mate from the crane and the crew feel the impact. Nolan frees the injured female just as Orca emerges and takes Novak down with him. Nolan and Orca stare at each other and the whale soon leaves the boat alone.

At dawn, Orca pushes the body of his mate through the ocean in deep sorrow and arrives at a shoreline where he puts the female's body to rest as a proper burial. Nolan learns that the whale followed him to get revenge for the death of its mate, but he did not listen. Orca rams parked boats in a harbor shocking the crowd after the boats sunk and Nolan spots the whale that followed him. Circling the harbor at night, Orca smashes a gas pipe spilling gas and knocks down a torch lap, lighting the gas on fire and fire engulfs the harbor which then spread to fuel tanks causing them to explode. Orca jumps in victory and watches the event before finally swimming away to hide. On the second night, Orca finds Nolan's beach house and rams into the wooden pillars causing it to lean to the water. Annie and Nolan hang on but due to having a broken leg, Annie has a hard time getting up. Paul arrives and shines the light to focus on Annie. Nolan and Paul use a fishing net to help Annie get back up. Orca charges towards the house, emerges, and then bites off Annie's broken leg and finally swims away with the leg in his mouth.

The next morning, Nolan sets out to sea along with Rachel and Ken to find the whale. Ken walks on the boat's mast but Orca emerges and drags him into the water killing him. Orca leads the crew to the icy waters of Strait Of Belle Isle where it moves an iceberg as he approaches the boat. Nolan harpoons the whale as he surfaces and Orca yells in pain as he pushes the boat closer to the bigger icebergs. An avalanche of ice falls down on Umilak and gets crushed after sending out SOS. Nolan and Rachel abandoned ship on an ice flow and watch the boat sink. Orca rams underneath and Nolan fires every time the whale breaks the ice. Orca rams under the iceberg causing Nolan to fall on another and separates the icebergs trapping Nolan. Orca submerges behind Nolan and lets a loud roar as Nolan cries out, "WHAT IN HELL ARE YOU?!" Orca jumps onto the iceberg and uses his body weight to tilt the ice and Nolan slides into the icy, cold waters. Orca swims around Nolan for a while and then uses his tail to lift up the captain which sends him flying into the iceberg where Rachel was standing, killing him. Rachel watches in sadness as Nolan's body slips into the icy waters. With his revenge complete, Orca swims southward in victory as a rescue helicopter arrives to rescue Rachel.

As the credits begin to roll, Orca is shown swimming beneath the thick arctic ice and butting his head against it, attempting unsuccessfully to surface for air. Though his fate is ultimately uncertain, it is suggested that Orca will likely drown beneath the ice. Other viewers have alternately suggested that the whale, with his revenge done and his rage gone is left with only the feeling of devastation and loss and is seeking to end his own life by drowning. 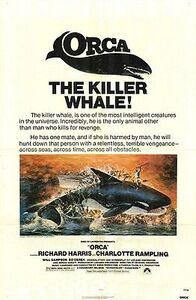 Orca and his mate jumping in the open ocean.

Orca approaches the boat as his mate starts to be pulled up.

Orca bellowing in sadness as witnesses the death of his child.

Orca crying for the death of his mate and child.

Orca pushing the body of his mate as pod members pay their respects.

Orca in deep sorrow as he pushes the body of his mate.

Orca bellowing at Nolan after being harpooned.

Orca using his body to tilt the iceberg that Nolan is trapped on.

Nolan starting to slip as Orca tilts the iceberg. 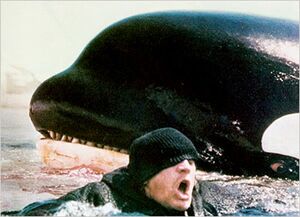 Nolan in the water with Orca.