9,700 years ago (founded and destroyed around the same time).

Republic of Acorn (also known as the Kingdom of Acorn)

The Order of Ixis, also called the Ixians, is an ancient cult-like secret society of spellcasters that originated many centuries before the birth of Sonic the Hedgehog, roughly 9,700 years ago.

Founded by Ixis Mogul (Mammoth Mogul), who developed much of the Order's knowledge as he gained increased understanding of his Chaos abilities, the Order soon drew other beings who were interested in obtaining power through the natural forces on Mobius. Eventually, this ancient order of evil became involved in a conflict with the Albion Knights of Aurora known as the Forgotten War, which ended with the Order's defeat and destruction.

This was partly because the Albion Knights of Aurora forsook their code of valor and resorted to using any means necessary to stop their enemies. This was reported to Ixis Mogul by Ixis Vale, a member of a quartet of highest ranking mages within the Order of Ixis known as the Four Elite. At the same time, Mogul contemplated the creation of what would become one of the order's most powerful spells known as the Eldritch Rites: a magical technique that could bend the minds of others to the will of it's user. Despite his efforts and the use of Mutates by both sides, the war ended with the Ixian defeat.

After Operation: Clean Sweep founded by Doctor Eggman, the spirits of the Ixis sorcerers were re-awakened in the body of the mad conjurer Ixis Naugus, haunting him of the past and each desiring to control Naugus' body as their own. They cannot be seen or heard by other beings, and will often create thoughts in Naugus' head as if he had a few split personalities. Eventually, this led to the Ixis Resurgence.

The Four Elite were a group of 4 spellcasters who were the top-ranking members of the Order of Ixis, second only to Mammoth Mogul himself. After fighting the Albion Knights of Aurora in the Forgotten War, the group was apparently disbanded, with at least one of them-Ixis Vale-receiving burial in a tomb in Soumerca. 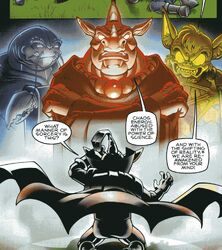 The spirits of the Order of Ixis. 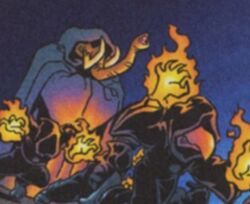 The Ixians, also known as the Order of Ixis.