Temple of the Ancients

Destroy both the Sith Empire and the Galactic Republic (failed).

Fanatical Dark Knights
The Order of Revan is a cult dedicated to the teachings of the Sith Lord Darth Revan. Their numbers are in the thousands and stretch across the galaxy. They are the main antagonists of the Shadow Of Revan expansion to Star Wars: The Old Republic.

The order was initially founded by Sith-in-training Tari Darkspanner after she stumbled across records telling of Revan. Tari came to believe that Revan had actually succeeded in defeated the Sith Emperor and become the new ruler of the Sith Empire.

However, the Dark Council eventually discovered the Order and began trying to suppress their teachings. Thus, the Revanites moved their base of operations from Dromund Kaas' capital to a compound in the jungles of the planet.

During the Galactic War, Revan himself (or at least his shadow half) became leader of the Order. Under Revan's direction, the Order's member's succeeded in infiltrating high-level positions in both the Republic and the Sith Empire. Two of the Order's high-level infiltrators, Darth Arkous and Rian Darok, masterminded several operations to acquire technology from the ancient Infinite Empire.

With the assistance of Selkath geneticist Gorima, the Revanites created an army of cyborg supersoldiers. However, they were forced to flee their underwater base when both the Republic and Sith Empire discovered their plans. Arkous and Darok were pursued to Lehon by strike teams from both powers where they were killed and their Infinite Army was destroyed. However, Revan arrived shortly after with a fleet comprised of ships from both galactic governments and had the fleet fire upon the temple to wipe out the Strike teams, but they managed to escape.

The Republic and the Sith Empire eventually entered a temporary truce to defeat the Order. Revan took his forces to Yavin 4 to accomplish his true goal: to revive Vitiate, the Sith Emperor so he could destroy him for good. The Revanites easily defeated the Imperial Guardsman stationed at the Imperial Guard Academy on the moon, and took control of the Temple of Sacrifice, wherein lie a device capable of absorbing all life on the moon. However, the Republic and Sith coalition of forces soon arrived and attacked the Revanites, with the elite members of the coalition confronting Revan and defeating him. However, the amount of casualties generated by the battle actually managed to revive Vitiate, whose spirit departed the moon soon after.

Revan was then confronted by his light half, who convinced the the dark half to release his body and merge with him once again, ultimately resulting in Revan disappearing, leaving behind his mask and lightsaber. Without Revan to lead them, the Order presumably disbanded. 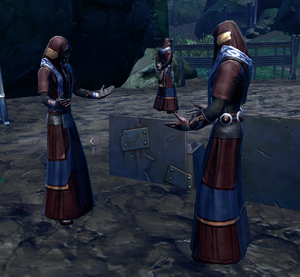