Unknown (at least 200 years of being under the Gorgon's command)

Abbess (possessed by the Gorgon)

The Order of St. Agnes are a Sisterhood of nuns under the command of the Gorgon, who had transformed the once peaceful nunnery into a mind-controlled cult for over 200 years - with each generation being a fanatical servant to the Gorgon's will, caring for the ageing Abbess with which the alien infiltrated their society and corrupted their faith.

The Order would be tasked by the Gorgon with retrieving a talisman by which to open a portal to the Gorgon home-world and allow the aliens to invade Earth and presumably wipe out the human race (after possessing and draining them of all energy) - this would lead them into direct conflict with Sarah Jane and her family.

the Order of St. Agnes were a nunnery based in St. Agnes Abbey and were originally a peaceful organization devoted to worship, this would change when their Abbess was taken over by the Gorgon and the parasitic alien put the Order under its mental thrall. For nearly 200 years the Gorgon twisted the Order from their original ways, making them fanatical slaves to its will and with them built a large portal by which to open a gateway to Gorgos, yet lacked an alien artifact in the form of a talisman in order to fully open said portal.

After much waiting the talisman would be located in the hands of Sarah Jane and her family, prompting the Gorgon to send the Order of St. Agnes after them. the Sisters quickly pursued Sarah Jane and her family, abducting them and bringing them to the Abbey so as to begin the ritual and unleash the rest of the Gorgons - however during a confrontation the Gorgon was defeated by a mirror, killing the Abbess and the Sisters could only watch in despair as their leader perished.

It is unknown what happened to the Order following the death of the Gorgon as they were never seen again.

The Sisters had no powers of their own but had access to many resources, such as blindfolds and bindings as well as their own car - due to being controlled by the Gorgon they were cunning, fanatical and violent without question and would perform any task asked, even murder.

the Sisters also had several modifications to their Abbey, such as a garden filled with the petrified remains of victims of the Gorgon and a large pit that served as an inactive portal to Gorgos, with the use of the talisman this portal could be unlocked and bring about a full-scale invasion but it was avoided when the Gorgon was killed. 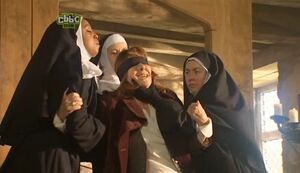 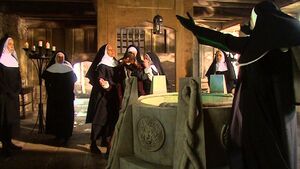 The Sisters with the well.