To get revenge on Jon Snow

Orell is a character that hails from the A Song of Ice and Fire novels and it's television adaptation Game of Thrones. He is a wildling warg who can enter and see through the mind of an eagle.

In the show, he was portrayed by Mackenzie Crook.

In the books, Orell's human form serves as a one-shot character in A Clash of Kings, where he and another wildling are killed by Jon Snow at the Skirling Pass all the while he inhabits his warging his eagle self. His body is tossed down the mountains, and the rangers capture the wildling spearwife Ygritte. However, Orell's consciousness lives on inside his eagle, who develops a deep hatred towards Jon Snow and helped Rattleshirt track down Jon and Qhorin Halfhand. In A Storm of Swords, the eagle uses his talons to attack and scar Jon. Varamyr Sixskins, another wildling skinchanger, takes control of Orell's eagle and uses it to scout Castle Black and spot Stannis Baratheon and his army. The eagle was then burned by Melisandre, destroying Orell's consciousness forever.

Orell (or at least as a human) played a much larger role in the show than he did in the books. In the 3rd Season, he, alongside most of Mance Rayder's wildling host, along with Jon Snow, who Orell is constantly suspicious of, begin to march through the Frostfang Mountains. Orell wargs his eagle, and discovers dead members of the Night's Watch at the Fist of the First Men.

When the host reaches the Fist, Orell and the other wildlings find several corpses of horses slaughtered by the White Walkers that have been made into a pattern. However, they did not find human corpses anywhere. In Episode 6, the wildlings climb the wall, which causes an avalanche due to a crack in the ice. Orell cuts Jon and Ygritte's rope after losing footing, but they manage to swing to safety.

After passing through the wall the wildlings find a horse breeder and Queenscrown, in the Gift. Orell wargs his eagle and find some horses, gold and steel to supply for their invasion attack. The wildlings want to kill the breeder, which Jon opposes, eventually leading him to hit a stone to warn him. The man tries to ride off but is cornered by the wildlings. Tormund wanted to kill him himself, but Orell insists that Jon must do it to prove whether he is still loyal to the Night's Watch. Jon is unable to do it, and Ygritte shoots the man herself.

Orell then proclaims that Jon is still a "crow", and a fight ensues. Jon stabs him in the chest, but before dying, Orell wargs into his eagle one more time. The eagle attempts revenge by scarring Jon in the face with his talons but is fended off by Jon who manages to flee. 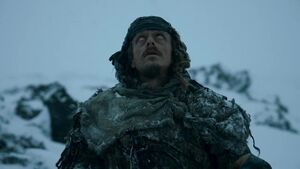 Orell warging into his eagle.
Add a photo to this gallery

Retrieved from "https://villains.fandom.com/wiki/Orell?oldid=3970193"
Community content is available under CC-BY-SA unless otherwise noted.