Use his Armored Rider powers to show the Beat Riders "true combat".

Oren Pierre Alfonzo, formerly known as Gennosuke Oren, is a recurring antagonist-turned-supporting character in Kamen Rider Gaim. He is an ex-military soldier and the owner of the Charmant pastry shop in Zawame who transforms into Kamen Rider Bravo using the Durian Lockseed. He later gets recruited by the Yggdrasill Corporation and takes Hideyasu Jonouchi as his disciple.

He is portrayed by Metal Yoshida.

According to Mai Takatsukasa of Team Gaim, Oren has been trained as a patisserie and gained a citizenship in France for 10 years and even won the Coup de Monde. He has also achieved the Relais Desserts grade. However, in secret he is also a former soldier of the Parachute Regiment and had fought in the Middle East and Africa, having done so to gain his French citizenship 15 years prior.

When Kouta tries to apply for a job in his shop, Oren teases him for his birthday, January 30, due to his dislike of people under the Aquarius sign, and for Kouta being a pretty boy with no style, thus denying Kouta a job in his shop. He later confiscated a Sengoku Driver and a Durian Lockseed from Team Red Hot for being loud in his shop as they celebrate their luck in obtaining a Driver to compete against the other Armored Rider Teams, Gaim and Baron. After watching the previous battles of the Team Gaim Riders and the rivaling team Riders, he decides to put the belt to use, hunting down Ryoji Hase and Hideyasu Jonouchi to test his abilities as Bravo. After defeating Ryoji and Hideyasu, Oren becomes a hit sensation, hunting down all Beat Riders with a Sengoku Driver to show them a true fight and what real entertainment is rather than their dreadful dancing. Defeating Kaito with ease, he tells him to train harder. When Oren interrupts Team Gaim's dance-off, Oren is confronted by both Mitsuzane and Kouta. Unaware of how Lockseeds work, he summons an armada of Inves. Defeated by Suika Arms along with his evolved Inves, Oren retreats back to Charmant. However, Oren later uses his Bravo attire as propaganda for Charmant.

Oren catches wind of the tournament made by Gaim's team, forcing himself to be allowed to join. In the forest, he is confused where he is, but locks horns with Baron once again, both proving to be an equal match with Baron gaining the advantage. However, Zangetsu defeats both him and Baron, with Oren falling in love with Zangetsu's elegant movements and quick, but fierce fighting style.

When Ryoji is no longer of use to Hideyasu, Oren takes it upon himself to train Hideyasu and shape him to be a real man. Oren was later hired by Takatora to eliminate Armored Riders Baron and Gaim. As Baron's Inves are about to attack the citizens, he arrives and fights Baron. Fighting to protect citizens from Baron, the citizens then proceed to cheer for Bravo, as he proclaims himself the "hero" of the city. Later, while Kouta is trying to stop an Inves from escaping, Bravo appears and fought him as Kouta transforms. While fighting, Kaito appears and team up with Gaim as they easily overpowered Bravo. Days later, Oren alongside Hideyasu was hired by Mitsuzane to steal Kouta's Sengoku Driver. Oren gladly accepted the task from Mitsuzane (who was disguising his voice) on the condition of being told how to contact Zangetsu. However, Oren wrecked the plan due to his feelings of dislike to have his guest being disturbed while eating his pastries. Oren chose to steal Kouta's Sengoku Driver after defeating him in combat, but due to Gaim Jimber Lemon Arms being more powerful, he failed to complete his objective.

After Oren read the flier of the dance event, he, along with Hideyasu made a public announcement of stopping the event. Later, before the event could start, Oren arrives and mocks the rest of the Beat Riders while the summoned Inves from Hideyasu crash the event. Kouta transforms to stop Bravo and the Inves crashing the event along with Zack as Knuckle. After the Beat Riders finish their dance, Gaim declares his victory to Bravo as he decides to let him go. Bravo, still not giving up, tried to chase him but stopped when he struggled to remove a Duri Noko that he accidentally stabbed into his right foot. After some time, he and Hideyasu appear to try to turn the public against Zack and Peco by insisting that giving up their Inves Game is just propaganda. However, his speech was interrupted by a swarm of Elementary Inves, which made him upset. He later transforms and finished off all the Inves by himself.

As he sees Hideyasu was in a bad mood, Oren decides to take him into training. However, Hideyasu stormed out of the shop as he doesn't see what was the training for. Oren manages to find Hideyasu in Drupers as he blames the Beat Riders and reveals that Hideyasu is preparing for his greatest moment. He transforms and chases Gaim until Inves appears. While fighting, Hideyasu as Gridon arrives and blocks the attack from the Inves. Bravo then took him away while Gaim deals with the Inves. Later, Hideyasu woke up and told Oren that the Inves Game really ended as he sees his teammates hanging out with other teams. Later that night, Oren found a Crack as he enters with a surprise. While wandering in the forest, Oren finds himself starving. When approaching a few premature Lockseed fruits, he remembers his cruel military survival training saying not to eat foreign objects. Saved by Kouta and his generosity with riceballs, the two find the Over Lords attacking the Yggdrasill camp. Teaming himself with the Kurokage Troopers, they stop any rampant Inves attacking the camp. Oren later takes a direct hit meant for Zangetsu Shin, falling in his arms. However, Zangetsu Shin, focusing more on the OverLord, throws Oren across the Headquarters Crack. Later, Oren, along with Hideyasu arrive to aid Baron, Knuckle, and Marika to fight the Inves and Demushu, however, the Riders were overpowered easily by the OverLord until Kouta appears to finish off the OverLord with his new form, Kiwami Arms. After an All Rider meeting in combating Helheim invasions led by Redyue, Bravo saved Gaim from Zangetsu Shin's attack when he finds out that the white Rider's scent is not the original one due to lack of the elegant fighting style of the original had.

Though Oren is flamboyant and effeminate, in reality, he is a man with a military background and has a lethal cocktail of having sadistic and homicidal tendencies, as shown when he transformed and almost attacked Team Gaim when he was annoyed by them. Due to this, it makes him almost as dangerous as Zangetsu. Oren sees the Beat Riders' way of competing as childish and believes that it needs to be made in his own way. He also tends to use a French accent, and sometimes uses French words in his speech. He also seems to dislike people born under certain astrological signs, such as Aquarius, signifying he reads horoscopes. He also sees Baron as a worthy opponent as he gave back Kaito's Banana Lockseed to him so that he could train to become stronger. But still, since he is not a Beat Rider, he didn't know the first thing about summoning the Inves.

Because of this lack of information, he was inspired by Kaito summoning the Inves in spite of already having transformed into Baron, and in an Armored Rider battle against Gaim and Ryugen, Oren threw down activated Lockseeds, causing him to lose control all of his Inves.

Like one of his archenemies, Kaito, Oren has a sense of honor who dislikes dirty works/tricks and deeply cares for his customers. As seen during the belt theft attempt, he places the happiness of his patrons above all else, even betraying Yggdrasill because their plan involved interrupting Akira's meal. Likewise, he shows a growing fondness for his protégé Hideyasu; when he goes through a personal crisis, Oren helps him work through it by pointing out that it was caused by the realization that he lacked a purpose in life, and encourages Hideyasu to become a stronger and more decisive man so he can find that purpose.

Like with the other Gashat-using Kamen Riders, Kamen Rider Cronus's forms are called Levels.

This form is briefly seen during Bravo's transformation sequence, before the armor attaches. However, this form is completely vulnerable to any incoming attacks when shot at directly in the suit, rather than at the Arms that is descending down on the Rider.

Durian Arms is Bravo's default durian-based armored Roman Gladiator form. Accessed through the Durian Lockseed, this form's Arms Weapon is the Duri Noko, while the helmet Bravo wears is the Duriking Casque with the ReduSight visor. This form debuts in episode 6.

Out of all the Armored Riders' main forms, Bravo is the strongest. As listed above, his punching and kicking power exceeded that of Zangetsu's. Adding to his versatility, his jumping height is only 1 m shorter than Gaim's Orange Arms, and has the exact running speed with Orange Arms, despite his bulky armor. He even can lift metal scaffolding with nothing but his bare hands, and is even seen somewhat keeping up with the Sakura Hurricane and Suika Arms' Odama Mode, though he was somewhat exhausted from the long run.

This Arms' finisher is the Durian Danger, which has two variations depending on which function Bravo activates from his Sengoku Driver. 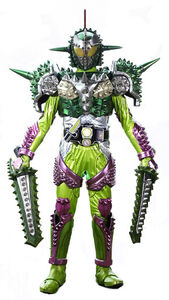 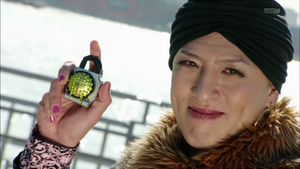 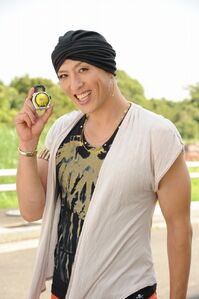 Oren holding up his Lockseed. 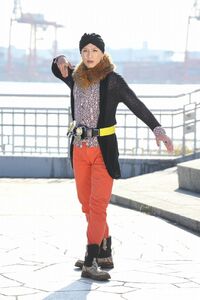 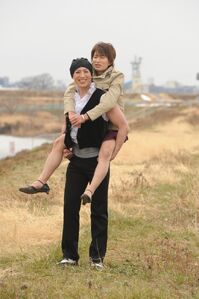 Oren carrying his apprentice Jonouchi on his back. 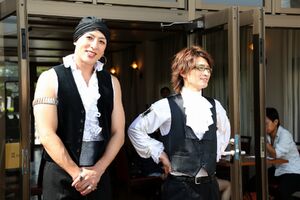 Oren and Jonouchi at Charmant. 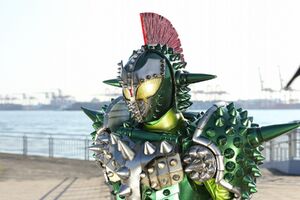 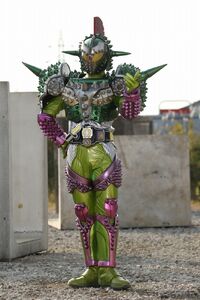 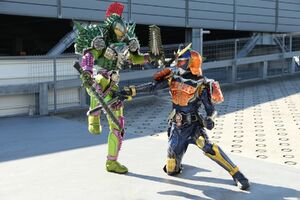 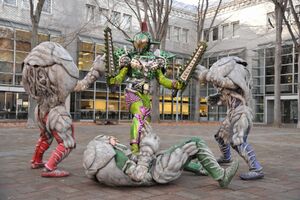 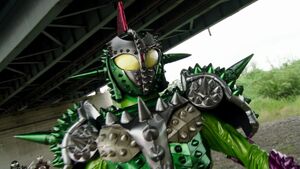