Absorb Godzilla's cells so as to reform his body and then replace Godzilla (temporarily succeeded, then failed).

Adapt to Earth to thrive in and rule it (failed).

Orga is an alien Millennian mutated by Godzilla's cells and the main antagonist of Godzilla 2000: Millennium. Orga is often confused with being the Millennian UFO when really he is made from the alien tissue that was inside the UFO.

He was portrayed by Makoto Itō, and his vocal sound effects were provided by Natalia D. Adams.

Before his mutation, Orga was Millennian, an ancient alien that crashed into Earth millions of years in the past. It was converted into anti-matter but retained the power to telepathically control its ship. Millennian laid dormant on the bottom of the sea, encased in rock.

Finally, Millennian's ship was discovered by the CCI (Crisis Command Intelligence) and they attempted to hoist it out of the water with balloons. However, the alien took control of its ship and raised itself out of the water on its own.

Millennian stayed on the surface, only moving so as to stay adjacent to the sun until it scanned a human, trying to see if he possessed the genetic material that it needed to reconstruct its physical body. However, the human proved insufficient and Millennian took to the skies in search of a creature with the proper genetic material.

It eventually found Godzilla whose DNA it believed could help it regain its normal form. Millennian attacked and defeated the King of the Monsters, but crashed into the waters nearby. Japan's Self-Defense Force attempted to restrain the UFO with steel cable, but it quickly freed itself. Millennian headed for Tokyo and attempted to assimilate the data throughout the city using invisible tendrils that wove their way throughout the building.

As night fell, the SDF attempted to stop Millennian again by planting mines on top of the building. However, it emerged unscathed and destroyed the building in retaliation, but found itself confronted by Godzilla again. Millennian attacked the monster king and crushed him with a building, allowing it to absorb Godzilla's DNA. It emerged from its ship and formed into its true form, but Millennian had not anticipated what side effects the radioactive cells from Godzilla would have and it mutated into the monstrous Orga.

Despite Orga's hulking body and menacing appearance, Godzilla charged this new opponent. The monster seemed rather confused as to what had happened at first, either due to shock from its transformation or its now degraded intelligence since Godzilla managed to land numerous blows on Orga. It managed to collect itself and unleashed a ferocious and brutal counterattack in an attempt to protect itself from Godzilla. The mutated monster later called on its ship to help it but the King of the Monsters blew up the ship with his atomic ray. Orga continued to take attacks from Godzilla but continued to fight thanks to its healing factor.

As the monster king seemed to start running out of options, Orga changed its plan and completely opened its maw. It began to withdraw its stomach in an attempt to consume its foe, but Godzilla took this opportunity and charged into his mouth. Orga began to devour the monster and mutate further, growing and sprouting dorsal fins from its back. However as the mutant grew to 70 meters in size, Godzilla unleashed his atomic ray which disintegrated the helpless Orga's top half, putting an end to the alien monstrosity.

When the composite form of Millennians turned into Orga, he was cruel, horrified, disoriented, and confused on what happened to his body, which made him vulnerable as Godzilla attacked him. Orga also lacked experience in fighting experience, be in either their previous collective form or newly mutated form, as he was only able to land a single punch on Godzilla, and spent most of the battle trying to avoid and endure Godzilla's attacks. While he still retained his Millennian intelligence, as it able to telepathically summon his ship to fight alongside him and wished not to fight Godzilla until realizing that escape is not an option, his intelligence was affected that made him more reckless in his attempt to defeat Godzilla, as he more.

This recklessness and attempt to become his downfall, as when he tried to swallow Godzilla whole, Godzilla used the opportunity to use his nuclear pulse to fry him alive, killing him. However, his unlikely happened had Orga successfully outran Godzilla and went to hiding, so he can get used to his newfound powers.

In the comic series, Godzilla: Rulers of Earth, Orga is portrayed as an out-of-control brute that attempts to eat anything it comes into contact with. Orga even attempts to eat Gigan at one point, even though the two kaiju were allies.

Orga possesses large strength, which also allows it to jump great distances, and durability and can fight with his huge claws. It can fire a powerful energy blast from his shoulder, which apparently was derived from Godzilla's atomic ray powers. It has regeneration abilities and is able to heal from most of Godzilla's Attacks. Orga can absorb the DNA of its enemy through a bite and can detach its jaw to chomp on or engulf its enemy. As Millennian, it can control his UFO telepathically. 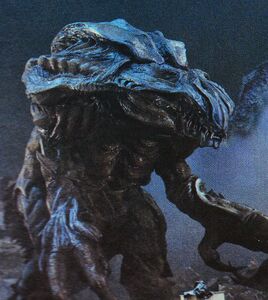 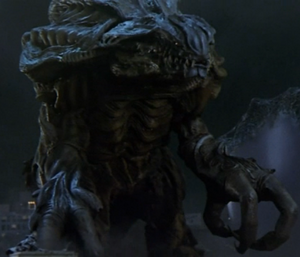 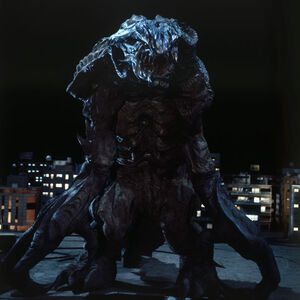 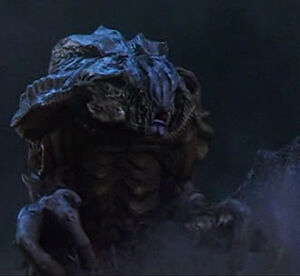 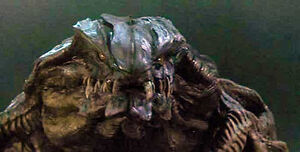 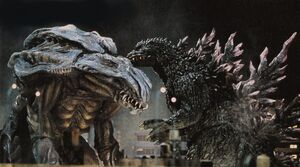 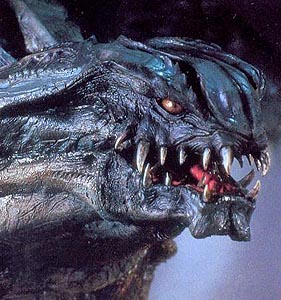 Orga’s breakdown as he begins to engulf Godzilla. 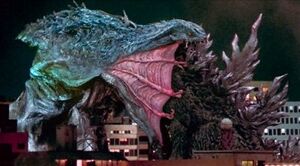 Orga rising to power while he is devouring Godzilla.

Orga about to be destroyed.

Orga being blasted apart by Godzilla. 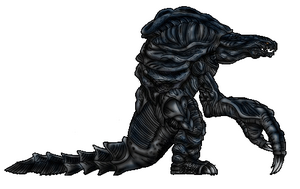 Orga as he appears in Godzilla Daikaiju Battle Royale. 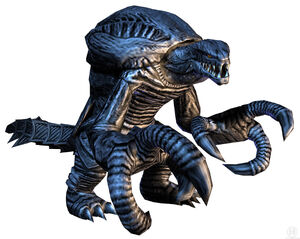 Orga as he appears in Godzilla Unleashed. 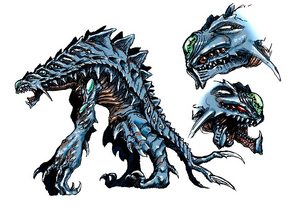 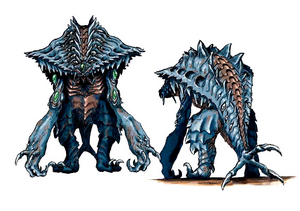