Basis104 - The one who carries the basis

Set up the Croce di Pietro in Academy City to have the Roman Church take over (formerly).
Protect people from the rising tensions between Academy City and the Roman Orthodox Church.
Create an ideology that everyone can agree and unite under.

Oriana Thomson (オリアナ＝トムソン Oriana Tomuson) is a character introduced in the Toaru Majutsu no Index series. She's a mercenary from the United Kingdom and serves as a field agent for the Roman Orthodox Church and originally appeared as minor antagonist. After being defeated by Touma, she is captured by the English Puritan Church and is sent to jail but is later on released and is redeemed following her defection to the Anglican Church and Necessarius. She becomes a member of both organizations to help protect people from the rising tensions between Academy City and the Roman Orthodox Church.

Oriana is a tall and beautiful young adult woman. She has long blond hair and blue eyes with her hair covering her right eye although it can be seen on some occasions. She's first seen wearing a grey jacket and pants with the jacket exposing her lower body and the upper and lower tips of her breasts but later on wears an organge gypsy skirt and a dark purple cloth over her chest as her current clothing. Oriana's most notable features are her large breasts which have many men and boys glaring at her.

Oriana is a femme fatale as she always uses her attractive looks to seduce males all around her to her advantage. She is seen using them as human shields often to form a crowd to distract her opponents and loose them in a chase. She appears to be dedicated to protecting people as she never harms them and tries to single them out from enemy magicians and she even regreted harming Aisa Himegami when she was confused her for a powerful magician from Necessarius. Oriana appears to be very playful as she is seen teasing Touma the first time they meet with wanting him to kiss her and acts like an older sister.

Oriana Thomson was born and raised in the United Kingdom where she and her family had been Christian all her life. She was devout to her faith and was at one point in time a nun and her uniform resembled that of a Roman Catholic. She then became a mercenary at some point in time and earns the title of Route Disturb and she becomes a top courier in the magic world. She then becomes dedicated to protecting the weak and people in general and she ends up becoming a member of the Roman Orthodox Church serving as the Roman Church's field agent.

Oriana Thomson first appears during the Daihasei Fesitval in Academy City where she is sent by the Roman Church to set up the Croce di Pietro in Academy City and is placed under the orders and supervision of Lidvia Lorenzetti. She navigates herself through the city when Oriana runs into Touma Kamijou who is looking for her but both of them are unaware of their true objectives. Oriana then begins to tease Touma after she seduces him with her attractive appearance when he's pulled away by his classmate Seiri Fukiyose.

Shorthand:Oriana Thomson uses a technique called a Shorthand (速記原典ショートハンド Sokki Genten (Shōtohando)?, lit. "Shorthand Original"), in which she mixes the symbols and the colors of the four elements in Western magic.The use of the incompatible colors allows for a reaction that Oriana can use as an attack, though not only that, but complex spells such a Counter Spell as well. This is because she used a "shorthand" (her cursive writing on the flashcard) of instructions on the flashcard along with the incompatible colors and symbols, like a mini original grimoire. However, it is imperfect and unlike an original grimoire is destroyed when the spell activates. According to Tsuchimikado Motoharu, unlike grimoires, Oriana's Shorthands' purpose is not to pass on the techniques and knowledge for future generations, but to destroy the Shorthand instantly when needed. Moreover, unlike original grimoires that corrupt its readers, because of the scribbled writing of Oriana, no knowledge can be passed on.

Oriana used her Shorthand instead of focusing on a particular element in order to circumvent enemies from reading her magic and making a defensive spell to counter it. Her various combinations are made through the use of the incompatible colors and names as well as the usage of angles which have laws for each of them based on Western Astrology, where there each relationship between the planets and the constellations have different functions due to different angles. Because Oriana uses page numbers on each flashcard to identify them, she cannot reuse the same spell again. This is to take advantage of the fact that her Shorthand grimoires will lose control and self-destruct because it won't stabilize. Each new "grimoire" creates a new spell. However, because of their imperfection, the most each "grimoire" can last is one hour, if it's fast, it will self-destruct in a few seconds.

Oriana has experience when it comes to melee combat, utilizing seductive and suggestive "stances", which, coupled with her already distractingly attractive appearance, results in a strike-grapple-and-counter style that robs her male opponents of any and all concentration. This, in combination with her magical prowess allowed her to defeat Tsuchimikado Motoharu— a vicious hand-to-hand combatant in his own right (though weakened at the time due to using magic)— in a one-on-one fight, as well as simultaneously fighting Kamijou Touma and Stiyl Magnus to a standstill.

Touma himself recalls in the seventeenth novel that she had astounding combat capabilities and was able to retain the upper hand in fighting him and his two allies depite ultimately failing in her objective. When Oriana parts ways with Touma to assist Sherry Cromwell in defeating the Knights of England, it is noted that while she is an excellent courier and escape artist she is not suited in fighting long, drawn-out battles—specifically against the eight fully equipped knights that were battling Cromwell. 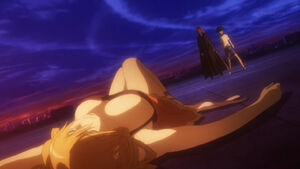 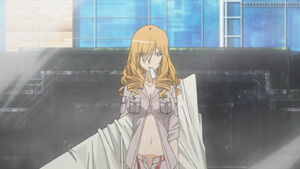 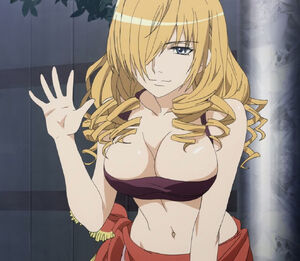 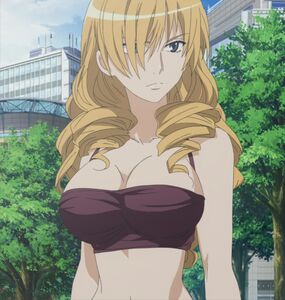 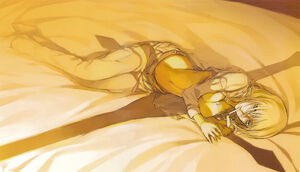 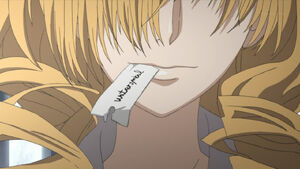 Retrieved from "https://villains.fandom.com/wiki/Oriana_Thomson?oldid=3544007"
Community content is available under CC-BY-SA unless otherwise noted.