Can turn invisible, enormous strength, high pain tolerance and impervious to most attacks

Feast on children to keep herself from hunger(succeeded until her death).

Vampire
Orianna is a supporting antagonist in the Witcher 3 expansion Blood and Wine. However, she was also featured in the A Night to Remember trailer for the main game.

Orianna is a higher vampire who successfully infiltrated the society of Beauclair, hosting lavish parties for the upper class of Toussaint. She also maintains an orphanage outside of Beauclair where she uses the children to get a fresh supply of blood.

Geralt first meets Orianna during a party hosted by her for the artist organization Mandragora. Geralt, who is searching for a thug from Cintra, eventually finds that the men has attempted to steal a royal jewel from Orianna's chambers. However, the man was confronted by Orianna who pushed him out of a window. After finding this out, Geralt's companion duchess Anna-Henrietta is surprised that Orianna was able to overpower the man. She remains however oblivious to the fact that Orianna is a vampire. Although Geralt suspects as much, he remains silent.

Moments later, Regis and Dettlaff, both higher vampires as well arrive at the manor and Geralt, Anna-Henrietta and Orianna sit down with them. Although they talk about the beast of Beauclair which is attacking the city, Annarietta remains oblivious to the fact that the vampire terrorizing the city is Dettlaff and that, except Geralt, anyone sitting at the table with her is a vampire. Eventually, Geralt and Annarietta leave the vampires alone.

Orianna can be encountered in the game once more, after Dettlaff has unleashed a horde of vampires on Beauclair. Geralt has the option to force Dettlaff to attend a meeting. In order to do so, he has to talk to a god-like ancient vampire. As he has no idea where to find that vampire, he visits Orianna who remains cold to the fact that vampires are slaughtering the city. Orianna has other concerns, as her orphanage seems to be under attack.

Together with Geralt, Orianna heads outside the city to the orphanage where they find only one child remaining, the rest have been slaughtered by an Alpha-Garkin. Orianna is furious as the man supposed to care for the children, Arnaud, has fled with his wife instead of protecting the children. She remains behind with the surviving boy and sends Geralt to bring her the head of the Garkin, promising to bring Geralt to the ancient vampire in return.

After Geralt returns, he finds Orianna sucking blood from the child's neck. She stops when she sees Geralt, claiming that she expected him to need longer. Outraged, Geralt tells her that he is not done yet as he has to deal with her. However, the small boy begs Geralt to spare Orianna because, while she is drinking from them, she is also protecting them and giving them food and shelter. Geralt indeed spares Orianna and throws the garkin-head at her feet. As Geralt has fulfilled his part of their deal, Orianna tells him the location of the ancient vampire's hideout and gives him a special stone to open the door. Before he leaves, Geralt tells Orianna that one day, he'll come for her.

A Night to Remember

Indeed, Geralt eventually hunts down Orianna who is terrorizing a village. Watching her strolling through an abandoned farm singing the song she also sung to the boy, Geralt eventually steps into the light and confronts her. He calls the song a 'nice tune' and claims that it has been a while since he heard it last, refering to the promise he made her in Toussaint. He reveals that he has been paid to take her down and Orianna states that in times past, no amount of gold would have swayed a witcher to take a contract on a powerful creature like her. Geralt claims that times have changed and Orianna uses her powers to turn invisible. She then lures him into the barn. However, unbeknownst to her, Geralt also drinks a potion called Black Blood, which is poisonous for vampires.

Inside the barn, Geralt throws a splitter bomb inside Orianna's general direction to make her visible for him. A vicious battle then ensues in which Orianna overpowers Geralt and bites his neck to drink his blood. However, as Geralt drank the potion Orianna is poisoned and weakened. Geralt blasts her away by use of Aard and then cuts off her arm and slices her face. Injured, Orianna crawls outside of the barn while Geralt shoots her into the back with his crossbow. Outside, both fall to the ground next to each other due to their severe injuries. Geralt passes out and the next morning, he finds that Orianna has died from her injuries.

During the soiree organized by the Mandragora, Geralt met Orianna, a valued patroness to many local artists. There was something about this woman that made most who met her feel somehow ill at ease. She could not break the witcher’s iron-hard self-composure, of course, but she did give him the impression she was no normal aristocrat – and his impressions were usually spot-on.
Regis' charismatic friend was revealed to be a fellow vampire, though nowhere near as civilized and humanitarian as he. She owned an orphanage outside the city which, as the witcher discovered to his horror, she used as a sort of blood cellar, visiting it whenever the urge struck her to drink some blood straight from an orphan’s neck. Geralt swore that if they ever met again… 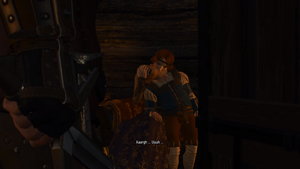 A Night to Remember

Orianna's dying moments
Add a photo to this gallery

Retrieved from "https://villains.fandom.com/wiki/Orianna?oldid=3881947"
Community content is available under CC-BY-SA unless otherwise noted.