Powers comparable to the Egyptian Gods and the Legendary Dragons combined

To exterminate all life and plunge Earth into darkness.

The Great Leviathan also known as the "Great Beast" and known in Japan as The Orichalcos God is a gigantic serpent creature who is behind all the events in Season 4 of Yu-Gi-Oh! Waking the Dragons arc and thus is the overarching antagonist and final boss of the arc.

The souls of Gurimo, Pegasus J. Crawford, Yugi, Weevil Underwood, Rex Raptor, Alister, Valon, Jospeh Wheeler, Mai Valentine, Rafael and Seto Kaiba were among the many fed to the Orichalcos God. The final soul was that of Dartz himself after he lost his duel to Yami who avenged Kaiba's loss to Dartz and freed the chosen duelists.

Later the remaining duelists' Duel monsters battled The Great Leviathan but it was completely ineffective; The Great Leviathan sent numerous shards which easily dispatched all of them, while all the duelists were captured by him except Yami. Yami, however, converted the darkness inside people and Duel Spirits' souls into light, allowing The 3 Egyptian Gods to be released. It also greatly weakened The Great Leviathan,while The 3 Egyptian God's powers increased immensely. It required the souls and powers of millions to neutralize him; Yami finally caused him to disappear by removing all of his remaining darkness within his soul.

After The Great Leviathan's death, Dartz was released from his control and the souls of all his victims were returned during the battle. 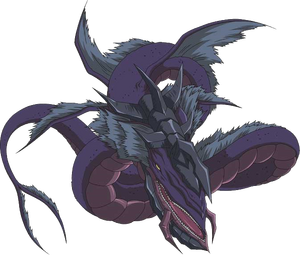 Retrieved from "https://villains.fandom.com/wiki/Orichalcos_God?oldid=3775557"
Community content is available under CC-BY-SA unless otherwise noted.