Inflict as much pain as possible (succeeded for while).

Torment Audrey (succeeded for while).
Give Seymour a dental surgery (failed).

Orin Scrivello, DDS is the secondary antagonist of the 1986 hit musical film Little Shop of Horrors.

He was portrayed by Steve Martin, who also played Mr. Chairman in Looney Tunes: Back in Action, Captain Smek in Home, and Hotep in The Prince of Egypt.

Orin Scrivello is a cruel, sadistic, and treacherous dentist who shows some symptoms of being a sociopath due to his relishing of other people's misery. Although definitely a villain, he didn't survive very long as his own maliciousness proved to be his undoing as Seymour plots to murder him and feed him to the main antagonist, the monstrous plant known as Audrey II. During his song, he admits to shooting puppies with a BB Gun, poisoning guppies and finding cats and bashing their heads as a kid.

In his deleted song ("I found a hobby"), it delves further into his love for torture. He mentions that when he was ten years old he saw his first horror feature, to which he got an erection.

Orin Scrivello is portrayed from the start as a troubled man who is likely insane yet has managed to be a successful dentist (it is implied he is a success due to his talent to inflict torture on others, a stereotype of dentists). He takes delight in his job, where he is free to abuse staff and customer alike without care. However, he comes into conflict with Seymour when he begins to date his love interest Audrey. Upon witnessing Orin verbally and physically abusing Audrey while Audrey II is goading him to feed her someone who deserves to die, Seymour plots to kill his rival and feed him to the plant in revenge.

In order to do this, Seymour heads over to Orin's surgery to take him up on a previous offer of a free root canal. Unfortunately, he arrives at Orin's surgery just as he had finished trying to torture a masochistic patient. Enraged that he couldn't install fear or pain into the demented patient, he set upon Seymour with sadistic madness, forcing him into a room where he began to torture him. Wanting things to be "special", Orin puts on a bizarre mask that allowed him to breath in laughing gas, making him high.

Orin became disoriented as a result and although clumsily trying to continue the torture ended up falling over, Seymour pulled out a gun and threatened to shoot Orin but couldn't bring himself into committing the deed. Regardless, Orin was already doomed as his mask malfunctioned and he fell to the ground, beginning to choke to death. Orin's last words were "What did I ever do to you?" to Seymour, who responded "Not what you did to me, what you did to her" and Orin looked puzzled before he finally realized and died with the final line: "Oh.. her.." - his body is later fed to Audrey II by Seymour.

Audrey later expresses guilt over Orin's death despite not being involved because she had always secretly wanted him to disappear due to his behavior towards others. She was likely far from the only one who wished such a fate upon him. 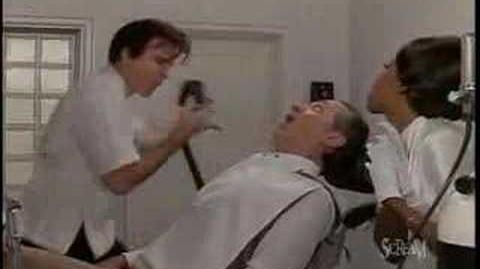 Retrieved from "https://villains.fandom.com/wiki/Orin_Scrivello?oldid=3482521"
Community content is available under CC-BY-SA unless otherwise noted.