One of the leaders of Leviathan

Sell the bio-soldiers to the highest bidders.
Kill Punisher and Black Widow.

Orion is the main antagonist of the 2014 anime film Avengers Confidential: Black Widow & Punisher. He is one of the high-ranking leaders of a global terrorist organization known as Leviathan involved in human trafficking, assassination, terrorism and drug dealings. He plans on selling the bio-soldiers that were created by Elihas Starr to the highest bidders in the black market in hopes of using them to start wars so that he can capitalize them.

He was voiced by Masashi Sugawara in the Japanese dub and by JB Blanc in the English dub.

Not much is known about Orion's background other then he works as a high-ranking leader of the terrorist organization that was formerly a secret division of Russian intelligence that is later involved atrocities, including human trafficking, assassinations, terrorism, and drug dealings. With their motivations unknown, this makes them both terrifying and dangerous.

At some point, Orion manipulated a former S.H.I.E.L.D. scientist Elihas Starr into creating a super-soldier serum so that Orion can forcibly experiments onto hundreds of innocent people, destroying their minds and rebuilding them into mindless bio-soldiers and sell them to the highest bidders in the black market, hoping the bidders will start a war between each other and giving Orion the chance to capitalize on.

When Punisher busts the weapons dealer Cain who is in possession of stolen S.H.I.E.L.D. technology, he accidentally interferes with Black Widow's mission to uncover a much bigger threat under S.H.I.E.L.D.'s investigation, Cain escapes and Punisher is taken into custody. Fury makes a deal with Punisher in exchange for his freedom for going on a mission with Black Widow to locate Cain and help them stop the global terrorist group known as Leviathan, that plans to sell the stolen technology to the highest bidder.

They located Cain to a Leviathan base in Slovenia and discover their lab that had pods filled with spies turned into bio super-soldiers by Orion. While Punisher goes after Cain, Black Widow crosses paths with her former lover Elihas, who had been presumed dead but revealed to have worked for Leviathan and creating the super-serum and did it to become worthy of being with the former as promised by Orion.

Soon after Elihas reformed himself, he and Black Widow teamed up to find an emergency kill-switch that the Elihas created as a safety precaution against the bio-soldiers. While the Avengers arrived at the auction hall and fought the villains, Black Widow and Elihas confront Orion and fought each other. The pair were able to activate the switch and disabling all the super-soldiers. While Punisher finds and moves in to kill Elihas, Orion tries to kill Black Widow with a fatal blast but ends up killing Elihas instead after he jumps in the way to save Black Widow. Orion is killed by the Punisher and Elihas dies in his former lover's arms in the process. 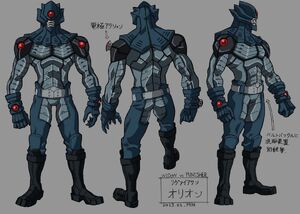 A concept art of Orion. 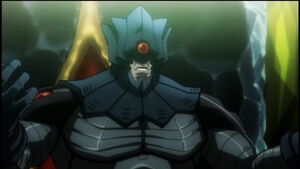 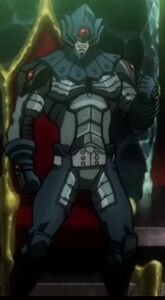 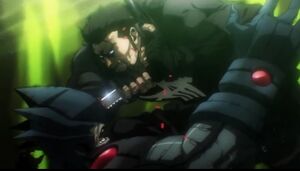