To get rid off all humanity.

Orka is a villain from Marvel Comics. He is an enemy of Namor.

Orka was an Atlantean and grew to become one of the strongest (but relatively dimwitted) soldiers in Warlord Krang's army. Orka stayed with Krang when he attempted to gain the throne from Prince Namor, and was exiled with his leader.

Orka was chosen to be the test subject of Dr. Dorcas, who wanted to imbibe a soldier with the power of a killer whale. (At this point, Orka needed to wear a belt which transferred the power of Dorcas' captive killer whales. Namor defeated the rebels, and, while battling Tiger Shark, Orka was buried in an undersea avalanche.

Orka managed to get free but was defeated by Namor again. The Brand Corporation, subsidiary of Roxxon Oil, contacted Orka and augmented his abilities to not require a power-transferring machine and cause him to grow in size. He defeated the Avengers who had returned from another reality, but was himself defeated by Thor. Orka managed to escape prison and found his way to the Atlantic, where he was among Attuma's henchmen when Attuma attacked the United States. Later, Orka was among those villains recruited by the self-proclaimed Master of the World in his attempt to overthrow the United Nations, only to be captured by the Heroes for Hire team.

Orka came to Knightwing Restorations, Ltd looking for help. Being away from the sea caused oxygen imbalance in his brain. Because he could not answer his questions he pummeled Otis Johnson around the office. He could not understand why he wouldn't die. After a while stopped hitting Otis and waited patiently for them to return. After that the two became friends.

Orka later became a member of Heroes for Hire. During an adventure he was killed by a Doombot that was reprogrammed by the Headmen. He appeared in the Underworld where he was part of Pluto's jury at the trial of Zeus. However, Orka later turned up alive, as one of the captives of Empire Unlimited.

After Namor changed his policy on the relationship between the ocean and the surface, he declared his territory off-limits to all but its native inhabitants. Orka appeared as one of the members of the Defenders of the Deep, Namor's own super-team assembled to impose his will on the surface world's presence in the oceans. 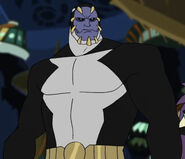