Always looking for a fight, even among themselves.

Spread their Empires/Klans across the Milky Way galaxy.

Prove to everybody that they are the biggest and the strongest.
Fight as much as they can

Orks are among the most violent and aggressive species known to exist in the fictional universe of Warhammer 40,000, to the point that Ork culture is almost exclusively geared towards war. They are based on the Greenskins from Warhammer Fantasy.

Orks are typically greedy, dumb, dangerous, and unbelievably destructive, caring only for fighting and conquest, though in truth conquest is not as big a deal to Orks as the thrill of combat. It is usual for Orks to gather into a spectacle of bloodlust known as a "WAAAGH!", which is a massive mix of mass migration, genocidal war, full-scale pillage and religious conflict (as orks try to please their twin gods, Gork and Mork). Once one of these frenzies has started few - if any - foes caught in the storm of violence that ensues live to tell the tale, but if the orks should ever truly unify, they would undoubtedly crush all opposition.

All orks generate a gestalt psychic field which only grows stronger the more orks are gathered. This is theorized to be the reason why ork technology works and why most ork weapons, despite being crude and ramshackle is so destructive. This psychic field also allows orks to make beliefs come true such as the belief that painting things red will make them go faster or painting a weapon yellow will cause it to make a bigger boom or noise.

The Orks are also one of the main threats to human domination and survival in Warhammer 40,000 - rivalled by the Chaos, Tyranids, and Necrons (there are infinite other minor alien species but all are said to pale in comparison to these threats).

In thanks to their fungi nature ork physique is incredibly robust. Orks feel surprisingly little pain even from the most severe of wounds and can keep on fighting for a short time after technically being dead. They possess fewer vital organs and extremely muscular bodies which makes them tough to take down and really dangerous to face in melee. Orks are also one of the few known races that can breath perfectly in the vaccum of space without wearing any protection and can adapt to any environment and thrive. Orks have been known to rip off human limbs with ease, sometimes even those who are encased in power armor.

Orks reproduce asexually via spores. Orks continually release spores throughout their lives and when they die they release spores in the hundreds. The spores burrow into the ground which will eventually grow into full-grown orks which can take anywhere from days to months. Spores are notoriously difficult to get rid off and the only way to effectively destroy them is through massive use of incendiary weapons and devices or in more extreme cases exterminatus, the action of completely eradicating the surface of a planet.

Meks are responsible for the construction and maintenance of an Ork klanz' technology. They are born with an instinctive knowledge of machines and an urge to tinker. Despite this, the majority of Ork technology is crude, though it still works due to the Orks' psychic powers and their belief that it does. Mekboyz can be considered to be the engineers and scientists of the orks.

Also called "Doks", they are born with an instinctive knowledge of anatomy and medicine, and are the closest thing Orks have to medical personnel, though they enjoy experimenting on their patients far more than healing them. Because of this, Painboyz hold a formidable reputation in Ork society and are typically sought after only if an Ork has no other choice. Occasionally, a Dok's experiments will provide benefits to the Ork on the receiving end of them, but this is usually unintentional.

Some Doks are overtaken by their curiosity and urge to experiment, becoming "Mad Doks" who are shunned even by other Orks. Outcast from their own kind, they roam the galaxy in search of test subjects for their experiments.

Weirdboyz are orks that possess far greater psychic powers than the mild ones held by their peers. However, they are unable to fully control their powers and are prone violent bursts of psychic power, causing them to have to carry copper rods to discharge their psychic energy into and wear bells to indicate their presence.

Weirdboyz' psychic instability is often used by other Orks to their advantage, by shoving them to the frontlines and taking away their copper rods, causing them wreak havoc upon their foes (and often a few friends as well).

Runtherd's are the shepherds and slave-handlers of ork society. They are rare individuals who take care of gretchin and snotlings and only they have the capability to breed squigs into monstrous squiggoth's, gigantic fungus dinosaurs who often serve as the main transport of wealthy ork warbosses.

Also called "Grots", they are a smaller subspecies of Ork that often find themselves enslaved by their larger counterparts. They are typically used for tasks such as clearing minefields or ferrying ammunition. They can also be used as helpers by mekboyz and painboyz. On the battlefield Gretchin are used to crew the various artillery pieces of the orks, but otherwise serve as cheap cannon fodder armed with primtive guns and melee weapons.

The smallest and weakest of the orkoid species. While Grots can take up secondary positions and act as servants, snotlings will typically serve as nothing more than pets. More lucky subjects get to take up agricultural duties such as cultivating fungus to provide orks with food, drink and medicine.

Squigs are the simplest form of orkoid life. Squigs serve as food, pets, warbeasts, accessories or even instruments. Numerous types of squig variants exists and they all serve a functional role in ork society. The most common type of squig resembles nothing more than a red ball filled with razor-sharp teeth on two legs. 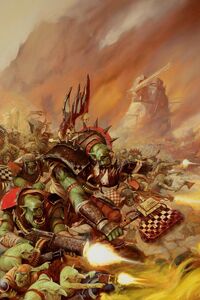 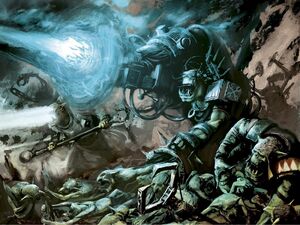 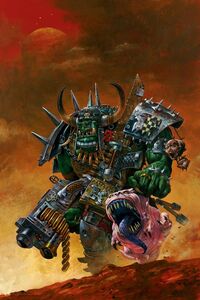 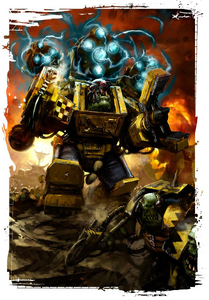 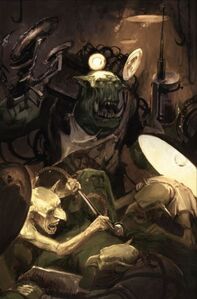 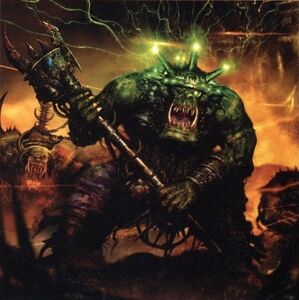 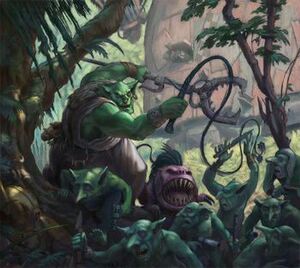 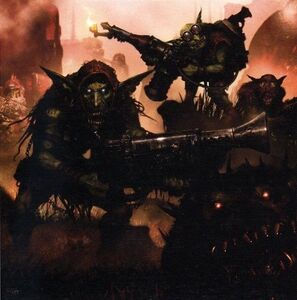 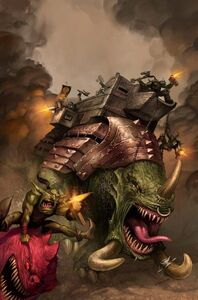 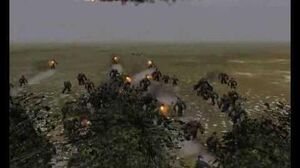