One of the Frieza Soldiers

Gather the Dragon Balls for Frieza

Orlen is a PTO soldier serving under Frieza and a minor antagonist in Dragon Ball Z.

Orlen is the same alien race as Appule except he is an orange humanoid octopus-like alien with large fangs, no spots on his arms, head, and legs, and red eyes.

Orlen is the one who finds the Namekian village that Vegeta had attacked for its Dragon Ball. He interrogates the only survivor, and learns that it was Vegeta's doing. He then kills the Namekian and returns to Frieza's ship to report. He lets it slip that he killed the survivor without first asking where Vegeta may have hidden the Dragon Ball, which angers Frieza. Frieza then kills him without a second thought, zapping him with ki beams from his eyes as Zarbon watched (note that in the original Ocean dub, Frieza killed him for cowardice instead - not wanting to stay where Vegeta might be). He later appears in hell alongside Appule and other past villains, watching the fight between Goku and Kid Buu.

Like nearly every villain in the Dragon Ball series, Orlen can fly and generate Ki Blasts. 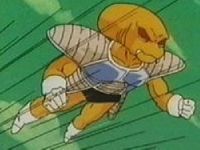