NOTE: This article is about the first incarnation of Cicada from the Arrowverse. The mainstream version can be found here: Cicada (DC).

Seeing Grace in the hospital (failed).

Kill every meta-human he can find to avenge his comatose niece, Grace Gibbons, and after which kill himself (failed).

Orlin Dwyer was the main antagonist of the first half of Season 5 of the TV series The Flash, later the secondary antagonist turned anti-hero in the second half and the first bearer of the Cicada mantle.

He is an enhanced serial killer who targets meta-humans in order to honor and avenge his family, specifically his niece Grace. He also wields a lightning-bolt-shaped dagger that nullifies their powers among other capabilities.

He is portrayed by Chris Klein, who also portrayed Dusty Lee Dinkleman in Just Friends.

One night, a CCPD officer knocked on Orlin Dwyer's door and told him that his sister was in an accident due to a meta-human attack, so her daughter, Grace Gibbons, was sent to live with him, as he was her next of kin. The two of them didn't get off to the greatest start as Orlin didn't want her around.

This all came to a head when Grace got in trouble at school and Orlin had to leave work to pick her up. Grace told him that he made her life worse and that she hated him as he also hated himself.

Sometime later, Orlin brought Grace to a rundown house that he said belonged to his cousin, Robbie. He tells her that they can live there if he fixes it up, and also shows her a dollhouse that they can rebuild together. It is at this point that Orlin apologizes to Grace and they begin to repair their relationship.

Exactly a year later, on the night of Clifford DeVoe's Enlightenment, Orlin had taken Grace to the Central City Carnival. When the Flash and XS destroyed the dark matter-loaded satellite, the resulting force of the double speedster punch shifted the falling debris. As a result, Orlin and Grace were hit with pieces of shrapnel. Orlin was struck in the right side of his chest, while Grace fell into a coma.

Orlin also came into possession of a piece of the satellite core shaped into a dagger, which was infused with large amounts of dark matter. At the hospital, the shrapnel, which resembled as a lightning-bolt-shaped dagger, was removed from Orlin's chest but left it with a permanent injury in his lung. When hearing from the doctor about Grace's condition and her viewpoint of who is responsible, Orlin watches the news and comes to the same realization that meta-humans are responsible for her current predicament. After instantly learning of his newfound powers over the dagger, Orlin fashioned himself a mask that makes the sound of cicadas when in pain and declared vengeance on the entire meta-human race and swore to kill every single one of them on Grace's behalf.

After the meta-human Gridlock was defeated by the Flash and his team and brought into CCPD custody, he was being sent to Iron Heights while being locked up in a truck in restraints to where he can't freely move his body. Orlin, as Cicada, was waiting for them before throwing his dagger in front of the trucks' route, which created a flashing explosion that stops the convoy immediately. Cicada then proceeds to attack the guards at will, dispatching every member who stood in his way, before opening the truck that contained Gridlock. Gridlock asked him who he was and what he wanted, only for Cicada to reply that he wants all meta-humans to die. He then approaches Gridlock with the blade in hand, much to Gridlock's terror, but only for Gridlock somehow escapes his restraints and fight him. However, Cicada uses his dagger to negate the meta-human's capabilities and overpowers him, just before he stabs him in the chest and kills him.

Afterward, Orlin is seen in a locker room, presumably one a part of Szrek Chemicals. As he is slowly recovering from his fight, an unnamed colleague sees the scars on his back and asks if he's been in another fight, in which Orlin simply confirms it. He then places his equipment into his locker.

Later, he attacks another meta-human, Vanessa Jansen, by throwing his dagger through her neck. The Flash, Vibe and Elongated Man confront Cicada, who uses his dagger to steal their powers. He then fights and overpowers them, and just as he is about to kill Flash, XS shows up, having taken Jansen to a hospital, calls out "dad" to Flash, which instantly stops Cicada. After a long pause and learning of the two speedsters' connection, Cicada instead spares the Flash and takes off just as they hear nearby police sirens.

A few days later, Cicada attacks Joe West in his home, demanding that he calls in Vibe so he can kill him. When Joe refuses, Cicada ties him up and proceeds to torture him for Vibe, but to no avail. After expressing his personal displeasure in hurting a family, Cicada then proceeds to kill him. However, after Joe's baby cries, he notices Cecille Horton with her phone and alerting Vibe. Cicada then approaches Cecille, just as Vibe breaches next to him, therefore allowing Cicada to tackle him back through.

Ending up in a forest, Cicada chases Vibe and uses his dagger to drag him back. Just as he is about to kill him, Flash arrives, but Cicada overpowers him again. Just as Cicada is about to kill Flash, XS shows up and throws lightning at him. She then gives Vibe a vial, who throws it at Cicada. However, Cicada knocks it back and just after it explodes, Cicada protects himself with a force-field. After declaring Vibe is dead and noticing that he was bleeding, Cicada flies off. Later, Orlin visits Grace in hospital, while the same doctor tries to advise him to stop.

Orlin later one night returns to his home where he begins experiencing incredible amounts of pain from his scar. As he stumbles on the floor, he then grabs onto a metal pipe to get up and then, much to his shock, starts crushing it.

Sometimes a week later, Orlin is in CC Jitters where his blade detects a meta-human leaving the cafeteria. Continuing his campaign, Orlin follows her to her car and, after revealing himself, fights her. Although she believes she has the upper hand, his dagger strips her of her powers and flies into her back, instantly killing her. The next morning, he heads to the hospital's medical storage. The doctor argues with Orlin about his reasons and why he is hunting the metas, only for Orlin to get irritated with her.

As he returns home, he passes out from the increasing pain and as seen when he was about to collapse, he saw a vision of himself on the ground. After waking up to the doctor wanting to attend to his scar wound, he rejects it, and stands up, declaring that it is making him stronger by granting him new powers.

The day before Thanksgiving, he is seeing Grace when he overhears a C.S.I. named Barry Allen looking for her room. Knowing that they were onto him, he hides while the doctor manages to get him to leave. That afternoon, he is on the phone with the doctor, who advises him to never visit Grace at all in order to avoid increasing further risks, which infuriates Orlin. On Thanksgiving, he goes against her advice and visits her in the hospital.

War with the Flash

Orlin was in the hospital with Grace where he notices that the Flash arrived and was waiting for him outside. Knowing that the speedster was aware of his secret identity. Donning his costume and dagger, Cicada confronts him and is surprised by the nickname he has been given. They then argue about his motives and agenda regarding that he is also a meta-human too. Cicada, however, retorts that once every meta-human is dead, he'll join them as well, just as Elongated Man, XS, and a very much alive Vibe reveal themselves. While attempting to negate their powers, Cicada finds that his dagger is called by a piece of Savitar's suit before Vibe throws it through a portal into space. Unfazed by this, Cicada calls it back, ruining their plan and negating their powers again. Just as he is about finish off The Flash, Killer Frost reveals herself and attacks him, revealing her immunity to his dagger, forcing Cicada to flee.

Giving Up His Vendetta

Although Dwyer gave up his vendetta on killing meta-humans, his niece Grace did not. At some unknown point in the future, Grace woke up from her coma and developed an immense hatred of meta-humans and anybody who either got in her way or defended them. She took up her uncle's mantle and began killing even more people than Dwyer did, racking up to a total of 152 people and rising. This led people to believe that Cicada (as they thought it was still one person) was an "immortal monster".

These future events proved that like the Flash, even if he would either be defeated or give up his mission, his legacy and reputation would continue to live on in the future.

Before he took Grace in, Orlin was a very selfish and lazy person. He didn't want to have to take care of anyone and he hated having to go to work. However, after taking her in, he started to turn his life around and became a supportive father figure to her. After the events of the Enlightenment, Orlin felt as though he needed to kill all meta-humans as he thought they were the cause of his niece's condition.

Despite having a massive vendetta against meta-humans, Orlin avoided killing civilians in his vendetta, though he didn't mind seriously injuring them, as shown with the police officers transporting William Lang. Caring for Grace also caused him to have empathy for other families as shown in his hesitation to kill Barry after Nora calls out to him (addressing Barry as "dad"). He also mentioned that Joe should cherish his family more, leading to the latter deducing that he was a parent.

His hate for meta-humans is to the point of recklessness as he disregards his own safety, refusing to have the shard in his chest that is killing him removed, as he states that it makes him stronger. He also did not care about his legacy and especially the fact that people would only remember him as a monster.

However, upon realizing that Grace was a meta-human, he more than willing to give up his vendetta and let Team Flash cure him of his powers, especially if it would also cure Grace of her powers as well. After being cured and realizing what his niece became in the future, Orlin felt remorse for his actions and tried to convince her that killing every meta-human she finds will not make the pain she feels any better. He even realized that the deaths of her parents were an accident. However, this didn't prove enough to stop Grace who killed him as a result. In his last moments, Orlin begged Flash to save his niece, proving that despite all of his bad decisions, Grace was still the most important thing to him in his life. 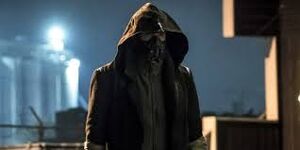 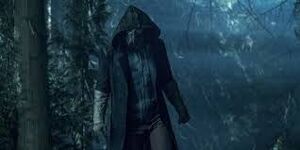 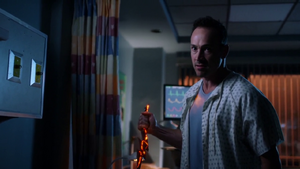 Orlin declaring war on all meta-human kind and becoming Cicada. 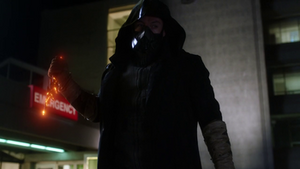 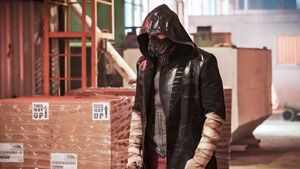 Cicada ready to fight The Flash and Killer Frost. 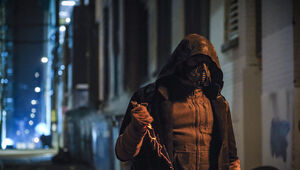 Cicada looking for a specific meta-human to kill. 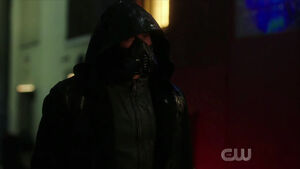 Cicada suspiciously listening to Barry Allen's speech about him. 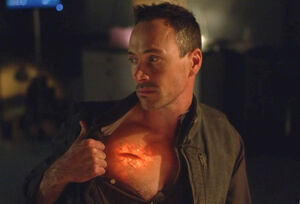 Retrieved from "https://villains.fandom.com/wiki/Orlin_Dwyer?oldid=4098643"
Community content is available under CC-BY-SA unless otherwise noted.