Orlis is impatient and short-tempered. As he threatens to cut the pay of his Mobile Worker team if they take too much time to neutralize the enemy. He is also sadistic as he laughs when firing at enemies.

Orlis is the commander of a Gjallarhorn team that is attacking the CGS headquarter, as Kudelia Aina Bernstein, who knows and wanted to expose the corruption of Gjallarhorn, is in there. Orlis's original mission is to capture and kill her. However, he ordered his snipers to fire at CGS despite of the protest from Crank Zent. Thus killing innocents. When CGS's Mobile Worker attacked them, Orlis easily destroyed them with the overwhelming power of his EB-06 Graze. However, Orga Itsuka lures him to where Mikazuki and his Gundam Barbatos is, and Mikazuki came out and instantly crushed the Graze's cockpit with its mace, thus killing Orlis immediately. 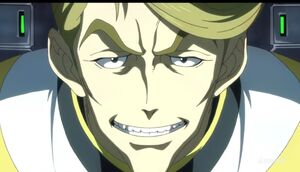 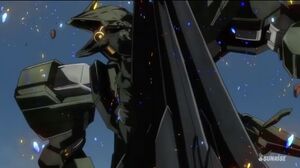 Orlis's death
Add a photo to this gallery

Retrieved from "https://villains.fandom.com/wiki/Orlis_Stenja?oldid=3803543"
Community content is available under CC-BY-SA unless otherwise noted.