King of the Worms

Leader of the Monster Association

Turn all living organisms into monsters and conquer the world.

Orochi, also known as the Monster King, is a major antagonist in the manga/anime series, One Punch Man, serving as one of the main antagonists in the Human Monsters Saga.

He is the self-proclaimed king of the monsters, and the leader of the Monster Association. Alongside his partner, Gyoro Gyoro, he plans to transform the human species into monsters and start a new age of monsters.

Orochi has a large, monstrous appearance with a humanoid face. One of his notable features are the horns that stick out of his head. His shoulders, fingers and knees appear to be modelled in the likeness of a monster's face. He has an insane amount of sharp teeth. He also appears to wear a large cloak that covers a majority of his body.

During his battle with Garou, it is revealed that his body was mainly a shell of his true self, in which his true form is revealed to be a mass of serpent-like creatures wrapped together, covering in sharp fangs and spikes.

Orochi appears to have a serious and threatening nature. He is intolerant for failure and will punish those greatly. He is shown to be cold and heartless, as he killed the Awakened Cockroach without hesitation, despite his pleas for mercy. When it comes to punishments, however, Orochi seems to be straightforward with them and moves onto the next task. Rather than inflicting torturous pain upon them, he decides to quickly dispatch them.

Despite his terrifying appearance, he is not actually completely ruthless, as he has shown to have a calm and collected personality. With enough rationalization, he allowed himself to spare Do-S's life, despite her failure. He also wishes to give humans the opportunity to join him, before willing to take their lives away instead.

In the past, Orochi was a regular human, until he was taken by Gyoro Gyoro. Presumably using the same methods on previous victims (i.e. monster cannibalism, cell transfusion, psychological torture) Gyoro Gyoro was able to transform him into the all powerful being he is today. Many humans had been the victims of Gyoro Gyoro's experiments, in which some did not survive the process, while others survived for a short period of time before reaching the Dragon level threat. Orochi was an exception, however, as not only was he the first successful attempt at creating a monster, but the first one to reach the Dragon level threat.

At some point, the martial artist, Gouketsu, challenged to take on Orochi in a battle. He was ultimately beaten, however, and was given a choice; either to die in the hands of Orochi or join the Monster Association as an executive member. Under complete submission, Gouketsu picked the latter and began devouring the Monster Cells he was given.

With many of the heroes being defeated at the hands of the Monster Association and after capturing Bofoi's drone, Gyoro Gyoro began to discuss their plans with Orochi.

After the death of the Hundred-Eyes Octopus, Gyoro Gyoro began to grew a bit worrisome about the potential threat that Tatsumaki could be to the association. Nonetheless, Orochi remained calm about the situation, as they can continue to creating more monsters by producing Monster Cells.

Some time later, Bofoi began to question Orochi and Gyoro Gyoro about their main goal through his drone. Gyoro Gyoro explains to him that while they plan on causing havoc, it is not their actual goal.

A meeting was later held by Orochi and Gyoro Gyoro. Gyoro Gyoro gives out a speech as to how the Monster Association will destroy the Hero Association, and their leader will form a new world of monsters. Nobody cheers for him, however, much to Gyoro Gyoro's surprise. An unknown figure claims that they're only here to destroy the Hero Association, not to serve Orochi. Orochi was surprised to find Awakened Cockroach among the crowd, then immediately devours him, as he refuses to allow failures live. Gyoro Gyoro then suggests that Do-S next, but she tries to reason them that she came back with little injuries and didn't actually lose. Orochi spared her life, but threatened she will be killed if she were to fail again. Gyoro Gyoro states that anyone who defeats Orochi will become the new leader. Orochi was surprised to see that Gouketsu was not around for the meeting, unaware of his death.

Orochi had eventually destroyed Bofoi's drone, despite the drone's best attempt at self defending itself once more.

Orochi watched as his henchman deal with Narinki's rescue squad through inflicting torture and pain. After Garou awakens, Gyoro Gyoro makes an offering to give him an executive position in the Monster Association under one condition; that he brings back the head of a hero for Orochi.

Garou did no such thing, however, and eventually ended up turning against the Monster Association once more. After being brutally beaten by Overgrown Rover, he is brought down upon by Gyoro Gyoro once more. It is from here that Gyoro Gyoro explains to Garou that he is starting to become more like Orochi and has the potential of surpassing him. Gyoro Gyoro offers to help Garou unleash the inner demon inside of him, but Garou refuses. With no other choice, Gyoro Gyoro brings in Orochi himself to deal with the matter. Orochi brings Garou down into the center of the Monster Associaton. From there, Gyoro Gyoro watches on a seat.

Gyoro Gyoro advises Orochi not to kill Garou, in order to unlock his monstrous form, thus Orochi refrains from using fatal methods but still cause major pain upon him. He was able to stab Garou in his stomach and send him straight to the wall, but luckily for him, Garou was able to survive. Orochi continues to attack him with his horns, but Garou was able to evade his attacks. Orochi instead ends up killing some of his minions. Garou then rushes straight towards Orochi to deliver a punch, but was caught off guard when Orochi attempts to eat him. Garou was able to avoid his attack, nonetheless.

Orochi begins to reveal the true nature of his self and begins to breathe fire on Garou. Orochi then forms one of his arms back together to deliver a punch to him, but Garou was able to block it. Despite this, Orochi proved himself to be much stronger as the punch sent Garou flying back into the wall. Frustrated, Garou decides to end this by relying on the Water Stream Rock Smashing Fist technique. Believing that Orochi has no way of striking fear, Garou is confident that he has him beat here. However, Orochi begins to observe his movements and copies his fighting stance, much to Garou's surprise. Garou then proceeds to engage Orochi in battle once more, only to be countered and sent back into the wall once more.

Orochi is officially classified as being above dragon, placing him in the same level threat as Boros. This makes him a very powerful monster and most likely the most powerful one in the Monster Association. Orochi has not displayed the full extent of his powers yet, as he is said to still have much more trump cards in his arsenal.

Both Gouketsu and Gyoro Gyoro have stated that he is above all of the monsters, rightful to his title as the Monster King. Orochi was also briefly shown to have defeated Gouketsu with no effort while he was still a human. Even after becoming a monster himself, Gouketsu still believed Orochi to be the most powerful of all monsters in the Monster Association.

As of now, he has shown these demonstrated the following: 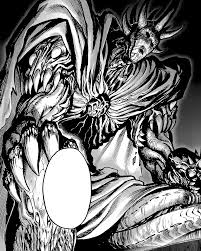 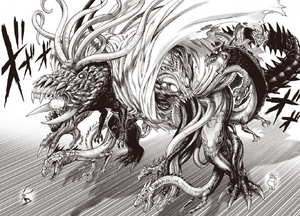 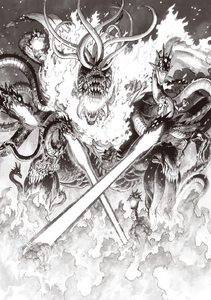 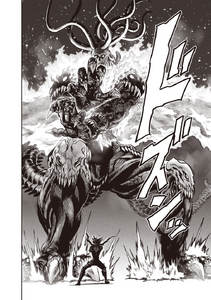 Retrieved from "https://villains.fandom.com/wiki/Orochi_(One_Punch_Man)?oldid=2940974"
Community content is available under CC-BY-SA unless otherwise noted.