Ability to turn and use his tail as a sword

Drinking Milkshakes/Saké (Depending if Original or Dubbed Version)

He is an Ultimate Level Digimon that is a 8-headed serpent-like dragon. Seven of them are mechanical with red eyes and yellow irises and the middle head is black, and is his real head with yellow eyes. He has a yellow mane like a lion's. His tail resembles like a rattlesnake’s tail.

A long time ago, Orochimon fell to another level of the Digital World and has enslaved a Gekomon and Otamamon village forcing them to make milkshakes for him (sake or rice wine in the Japanese version). Some time later, Andromon continuously tries to defeat Orochimon, but is unsuccessful (and later de-digivolved to Guardromon), and Jeri ends up being kidnapped by Orochimon to make milkshakes. When Kazu came up with a strategy to defeat Orochimon, he and the Tamers asked the Gekomon to help, but were skeptical at first, but changed their mind. The Tamers and the Gekomon set off to rescue Jeri, while Jeri puts Orochimon to sleep after drinking too much milkshakes, the Tamers arrive just in time to deal with Orochimon. As Renamon, Guilmon, and Leomon fought Orochimon and manage to take out three of his heads (which were fake), but Orochimon laughs at them that he can regenerate his false heads. Jeri manages to use a LadyDevimon Digi-Modify card on Leomon, and Leomon destroys Orochimon with the Darkness Wave attack. The Gekomon then were able To go back to their normal lives with Orochimon defeated.

An Orochimon served as part of the Bagra Army, was unleashed by MadLeomon to attack Mikey, Jeremy and Angie. Shoutmon and Ballistamon came to their aid and attacked Orochimon, knocking him out. Then MadLeomon absorbed Orochimon to become MadLeomon (Orochi Mode). After that form was defeated by Shoutmon X2, Orochimon's data was disolved.

Orochimon is a digivolved form of Eyesmon, appeared at the same spot Eyesmon defeated. It attacks the Digidestined’s Digimon, easily wiping them out with each of its heads. It was defeated by MetalGreymon, thanks to the encouragement of the other Digidestined and their Digimon partners. 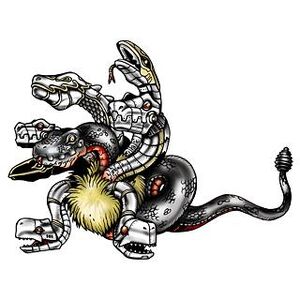 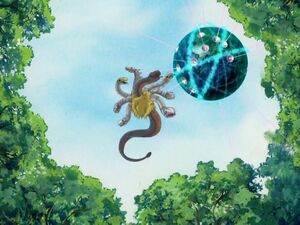 Orochimon falls from the sky. 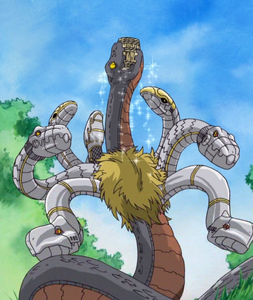 Orochimon is drinking the sage. 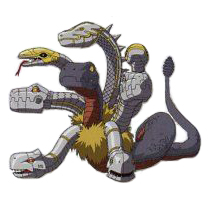