Leader of the Siblings

Manipulate (and falsely kill) Dathura to betray Ogrest, prompting the latter to cause the great flood in the World of Twelve.

Leave the Eliacube in the hands of the watchmaker and transform it into Nox (both succeeded).
Use hundreds of demigods as his optional family to forcefully convince the members of the Brotherhood of the Tofu and join them, then turn them into new gods, supplanting those who will die.
Take revenge on Yugo and annihilate the Gods joining the Dofus with the Eliacube to detonate an explosion inside the Inglorium portal (both failed).
Send the ones of his Brotherhood and Tofu Clan back home, to become sacrificed with Lady Echo (succeeded).

He is an Eliotrope leader and founder of brotherhood, the Siblings, helping Lady Echo with the plan to gather all the demigods and children of the dragons, get the Six Eliatrope Dofus eggs, put an end to the all gods in World of Twelve. Oropo, as well as many companions who were like him, suddenly appeared at the dawn of time via a time corridor, only a few years old. At first confused, they came over time with memories and feelings that belonged to Yugo. In this way they obtained an increasingly precise knowledge of the future, but they did not change it.

He is voiced by Frank Lorrain in the French version and Christopher Corey Smith in the English dub, the latter also playing Albus in Skullgirls, Betrayus in Pac Man and the Ghostly Adventures series, Goblimon, Splashmon, and Devidramon in Digimon series.

Specifically he is an Eliotrope (notice the first O), one of a race created by accident when Yugo wielded the power of the Eliatrope Dofus to fight Ogrest. Eliotropes appeared all across time, even in the Dofus era. They exist and don't exist at the same time, which explains why Oropo is struggling with phasing out of existence.

Later, Oropo being the last of his kind, joins the Siblings of the Forgotten. Later on, Echo, who believes in his cause, gives him the reins of the Sisterhood, and Oropo becomes the new chief.

Century after century, the Brotherhood explores different tracks to bring down the Gods, while recovering artifacts, such as the orichor or the Eliacube. In parallel, the group continues to recruit demigods, although Oropo doesn't hesitate to sacrifice them if it means of accomplishing his plans. Among his manipulation of the Siblings, it is revealed he was responsible for the discovery of Eliacube that is to be found by Nox, or the outbreak of Ogrest's chaos after killing Dathura.

The Defender of the Forgotten, a collection of the gods' children who never received the honors they deserved, Oropo is above all a fine philosopher and eloquent orator. He presents a new vision of the world and events that has a ring of truth to it. He seems more inclined to test the convictions of the Brotherhood of the Tofu rather than physically harm them. Several years after Ogrest's defeat, Oropo ordered Poo, Toxine, and Adamai to bring Elely and Flopin back to him, as the implementation of his project requires that he bring together a demigod from each class and that the two children of the Percedal family each have divine blood. After the capture of Flopin and her pregnant mother is successful, Elely manages to escape with her father, pursued by Poo. However, the actions of the Brotherhood of the Forgotten alerts the rest of the Brotherhood of Tofu.

After the Brotherhood of Tofu discovered his Tower of Dreams using the potions of recall that possessed Poo, Oropo appeared to them, exposing in turn each member of the Brotherhood to their fears and regrets. Having defeated them psychologically, he challenges them to climb the twelve stages of his tower, one for each of the "future gods" he has chosen. If Yugo and his friends reach the top while retaining their convictions, Oropo promises to fulfill any wish, and in particular to release Flopin and Evangelyne. As Oropo publicly claims that he wants to help the members of the Tofu Brotherhood to solve their personal problems, he admits to Adamai that he only contemplates their ascent of dreams as "a slow agony", and that their encounter with other demigods are only intended to strengthen the convictions of these. He also hopes to convince Elely to join his sibling, for he anticipates that she might be the future Iop goddess.

While Adamai puts him on guard against the Brotherhood, he rejects his arguments, since he believes that Yugo and his friends can not win against the Eliacube and the six Eliatrope Dofus. Echo then turns against him and sends the demi-gods and the Brotherhood of the Tofu in the Inglorium, subduing his plan. Oropo, still determined to carry out his project, takes the portal to blow up the Inglorium, despite everything. But, his memories with Coqueline, Ush, Black Bump and especially Echo, makes him guilty and finally decides to backtrack.

Battle for the Cause

Oropo imprisons Yugo in his mind, where he's forced to confront Nox and Qilby blaming him for their fates as well as the worst moments of his life. And Oropo is perfectly aware of what's going on. It turns out the Brotherhood of the Forgotten has been one for him in a sense. As he is an Eliotrope, a mirror of Yugo, he feels everything Yugo feels, and he feels the great affection Yugo feels for his brotherhood, but knows he can never truly experience it since he is not Yugo. So he started his own brotherhood to try to replicate it.

Oropo becomes less composed and gradually more unhinged when the true extent of his plans is revealed and even his companions opposes him. Eventually he calms down when he realize that he cannot bring himself to sacrifice his friends. After Yugo escapes from his mind, Oropo absorbs the Eliacube and the Six Eliatrope Dofus to transform into an avatar of a giant humanoid owl.

According to his memories, he was very close to Coqueline and both seemed to share a sincere love for animals. This memory came back to him when Coqueline attempted to attack him, for the latter no longer recognized the one she admired, after discovering that Oropo's plan to kill billions of animals as part of his final plans.

Feeling betrayed, Echo reveals the plan of Oropo which is to destroy the place where the Gods are: the Inglorium. Everyone turns against Oropo, although in spite of their efforts, no one can defeat him.

Once the portal to Inglorium opens and sets the Eliacube as a powerful bomb, Echo, in last hope, sends the demigods and the Brotherhood of Tofu into the Inglorium, destroying his plan. Oropo, determined to carry out his project, takes the portal to explode the Inglorium, despite everything. However, his memories with the Brotherhood come back to him in memory. He goes back to join the woman who has always loved him, Echo. Before dying, Oropo and Echo exchange one last kiss and then disappear by the destruction of the dimension.

Yugo receives the very last fragments of Oropo, finally putting an end to the Eliotrope people.

Oropo apparently looks like a tall figure and wrapped with a cloth hood all over his body so can also see some ears above his head, a mask making him look like an owl emanating in glasses a resplendent light (very similar to the tone that had Qilby to be affected by the Eliacube).

He is very similar to Yugo, being an Eliotrope created by him, he differs in having green wings in his hair that is dark brown, his young adult aspect reflects how many centuries it has taken for him to grow, his eyes have a forest green tone with black, his body is a little toned by his marked chest and abdomen. Without his hood, he wears a dark slate gray pants tied with a drawstring and adjusted to the calves, with leggings underneath it.

At his first appearance, Oropo is shown as mysterious, enigmatic and calm, but his intentions make someone really unsettling not to say that he wants to guard the Twelve Dofus and use allied forces of the demigods to be unstoppable. Soft spoken and friendly, even to the heroes, and his minions speak very highly of him. Ironically, he fears that they are loyal only to him and not the cause which he strives for. He is actually tricked into being defeated by his inability to sacrifice all of his minions.

Very courteous, even to the heroes, he tries to convince them to join his cause by talking. He never even tries to fight them or use violence against them at all. Still doesn't stop him for restraining his own followers with an electrical leash when he's producing the Eliabomb, or to trap Yugo in a personal nightmare where he's tormented by his biggest failures.

Unable to reproduce, each time one of them died out, the life of the survivors was lengthened. They sought help from the gods, but nothing was there. They decided to call themselves Eliotrope. He hates the gods for hiding away in Inglorium and not interacting with the world that needs them. However, it turns out he is the reason they are hiding in the first place. He manipulated Dathura into betraying Ogrest so that he would ravage the world, causing history to line up with what he knows history to be as Yugo's mirror image. But it was still his actions that caused the gods to go into hiding. Before Ogrest's chaos, the gods regularly interacted with the world. Also, some of the replacements as Harebourg or Toxine sounds highly questionable.

Oropo is an Eliotrope. Due to this, he has the same powers as Yugo. Namely, the power to make portals, create a sword of Wakfu and launch powerful lasers. He is also capable of using the Eliacube. But unlike Yugo, Oropo flies all the time.

Oropa appears as playable character in Krosmaga to use for the fight with those of his clan, and at the same time seen purchasable a pedestal with its appearance. One of the events bears his name and 90 collective cards, eight of them infinite, taken from the third season of Wakfu and new cards for each god. These letters are available exclusively in the new Brotherhood of Forgotten card envelopes.

Oropa does not appear physically, but a suit with his blue hood appears along with the glasses as a clothing. The Oropo's costume is free in packs of 13,000 ogrines or more.

Oropo is a playable character in the board game Krosmaster just like its online version, including his own card with a figure of him.

Oropo is a selectable character in the game.

In Ogrest Tome 3, Oropo has no appearance, nor is it mentioned by anyone, but its acts of bringing together demigods of different races is present in the comic. His partner, Lady Echo, is present to assist in the cause of destroying the gods of the Inglorium and replacing them. 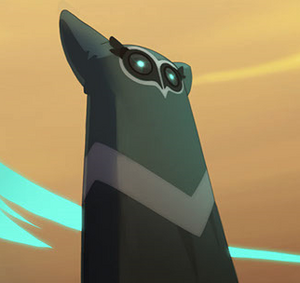 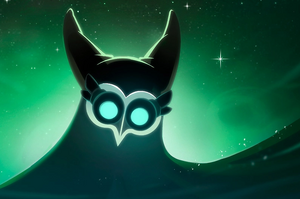 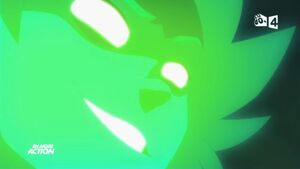 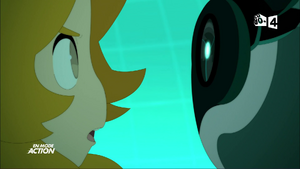 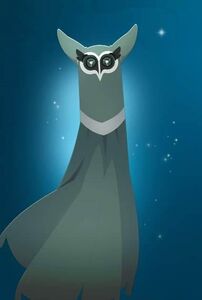 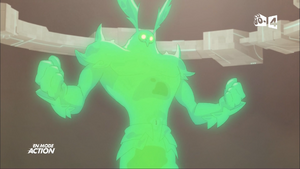 Echo making the decision to stay for a final kiss with her partner, Oropo. 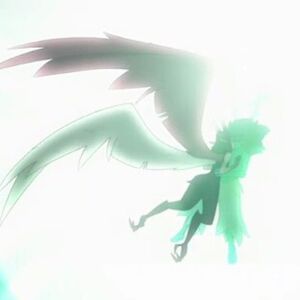 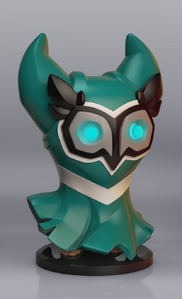 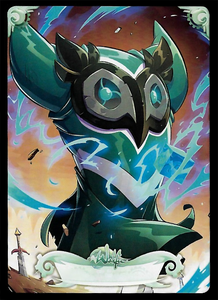 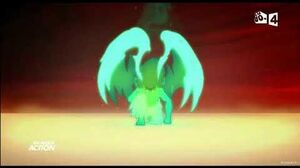