Orphan-Maker is the partner-in-crime of Nanny in the X-Men universe, and much like her, is a misguided villain who thinks he is liberating young mutants via forcibly taking them from their parents and often killing these parents. Needless to say Orphan-Maker's violent methods and madness have made him an enemy of many of Marvel heroes.

Along with Nanny, the Orphan -Maker has battled members of the X-Men, X-Factor, the Avengers, Generation X, and the Fantastic Four. 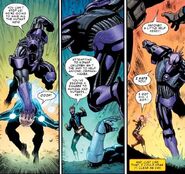 Retrieved from "https://villains.fandom.com/wiki/Orphan-Maker?oldid=4065753"
Community content is available under CC-BY-SA unless otherwise noted.