Orphan of Kos is a newly born Great One. Child of the deceased Great One Kos and host of the Hunter's Nightmare, the Orphan of Kos appears as the final boss of the Bloodborne DLC game The Old Hunters.

The offspring of the deceased Kos, the Orphan is a tall, skeletal humanoid that disturbingly resembles a hunter. Its mouth is permanently fixed in a rictus grin and it constantly screams throughout the fight. A thin membrane is draped across its back like a cape, which transforms into a pair of wings when the Orphan enters its second form. The Orphan wields its placenta in combat akin to a club or flail, and it can tear pieces off to use as explosive projectiles. After it transforms, the placenta mutates into a weapon resembling a gigantic axe or glaive.

When it is born, it looks up at the dark sun of the nightmare that it has been born into and cries, full of despair.

When the Hunter gets too close, the Orphan goes completely mad, running at the Hunter and attacking them relentlessly.

Despite its emaciated, corpse-like appearance, the Orphan of Kos is arguably one of the most powerful enemies in Bloodborne. It is quick and nimble, able to move about very quickly. The Orphan uses its placenta as a bludgeon, and is shown to be incredibly strong.

When low on health, the Orphan's attacks become even more unforgiving, and can even call upon a flurry of thunder to cover the field in waves of electricity.

Long ago, the Byrgenwerth scholars and the hunters that accompanied them came to the small fishing town of Hamlet in search of the eldritch truth, finding that Hamlet had a strong connection with the great ones. They proceeded to kill, torture and violate the residents of the town, hoping to find this truth from the brains of the villagers, believing them to be lined with eyes

The villagers and the priests that suffered with them called upon and prayed for the wrath of Mother Kos, and a curse was struck on the Hunters of Byrgenwerth and all of their successors (all hunters and blood-users who become drunk with blood and the hunt). This curse took the form of the Hunter's Nightmare, a hellish dream-world where all who become consumed with blood-lust are sent to hunt and kill for all of eternity. This curse could only be lifted should the secret of these sins be uncovered. Some such as Simon the Harrowed wished to lift the curse, while others like Lady Maria and Brador, who believes that the secret must be kept secret as penance.

On the upper-level of the Hunter's Nightmare (accessible through the Astral Clock-Tower) stands a rotting replica of Hamlet, preserved in-time through the dream and inhabited by monstrous fish-creature versions of the old residents.

In the town's beach lays the washed-up corpse of the Great One Kos. When the Hunter discovers this, the Orphan crawls out from the corpse, born from its dead mother as the Orphan looks upon the miserable nightmare it was born from and begins to cry.

It then proceeds to attack the Hunter unprovoked. When the Orphan is killed, a small, black phantom appears over Kos' corpse. The Hunter kills this phantom, where the phantom's misty form dissipates, the mist returning to the ocean. The blackened moon of the Hunter's Nightmare then clears away, revealing a calm sunset over the horizon. 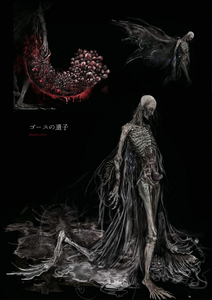 Concept art of the Orphan of Kos. 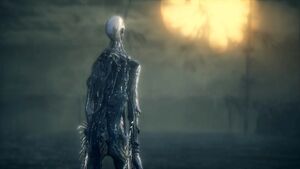 The Orphan of Kos looking at the sky of the nightmare he was born in and despairing. 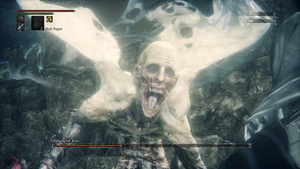 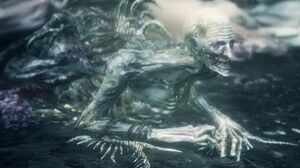 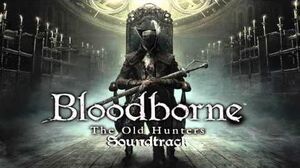 Retrieved from "https://villains.fandom.com/wiki/Orphan_of_Kos?oldid=3766975"
Community content is available under CC-BY-SA unless otherwise noted.