Torment and break Lucy. (succeeded at the cost of her life)

The Orphanage Little Girl is a minor but pivotal character in the manga and anime Elfen Lied. Her actions, and the reasons for these actions, remain a deeply divisive matter of debate. She was either a victim of circumstance or a fake female friend whose betrayal served as the final push in creating a monstrous killer.

The Orphanage Little Girl initially appeared as a friendly, polite, generous, courageous and sweet little girl, but this was just to disguise her true nature, in reality, she was a cruel, evil, ruthless, sadistic and rude little girl.

Little is known about the little girl's origins, but she is first shown befriending Lucy by protecting & aiding her against the bullies. Lucy at first resisted her offer of friendship, her alienation already begun. Lucy had kept a secret from all at the orphanage. In the grounds just outside the building, she had been feeding a stray puppy, and it became the only thing she cared for.

She later realized she did not have enough food for the growing dog, and thus went to the little girl for help out of necessity. The little girl made a promise to Lucy not to tell anyone about the puppy, knowing full well that if she did, the puppy would most likely be tortured as well. For reasons that are not clear, the little girl told Tomoo and the bullies about the puppy. Possible reasons range from her being tricked into revealing the secret to her being loose-lipped to her entire offer of friendship being a deception meant to gain and then betray Lucy's confidence.

As the little girl enters in the canteen, she is shocked to see Tomoo about to kill the puppy while forcing Lucy to watch, and though she begs them to stop, the puppy is soon killed. The little girl admits she was the one who told them, but her dialogue is ambiguous as to why she did this. The little girl then seemingly confirmed her betrayal by sporting an enigmatic grin. Again, the reason for this smile is unclear: It could have revealed her deliberate betrayal, been a nervous smile brought on by tension, or even been a hallucination on the part of a despondent Lucy.

Lucy, enraged by this, unleashes her telekinetic vectors for the first time, killing everyone in the canteen. The exact manner of the little girl's death is unclear from the scene. In later sequences, she is seen as a hallucination in Lucy's mind, tormenting her and showing a hole blown in her face. 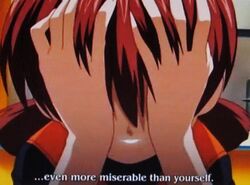 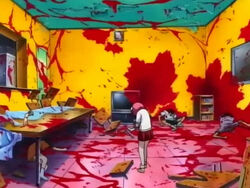 The little girl's death.
Add a photo to this gallery

Retrieved from "https://villains.fandom.com/wiki/Orphanage_Little_Girl?oldid=2671855"
Community content is available under CC-BY-SA unless otherwise noted.