She later realized she did not have enough food for the growing dog, and thus went to the little girl for help out of necessity. The little girl made a promise to Lucy not to tell anyone (especially Tomoo) about the puppy, knowing full well that if she did, the puppy would most likely be tortured as well. For reasons that are not clear, the little girl told Tomoo and the bullies about the puppy. Possible reasons range from (at best) her being tricked into revealing the secret to that she was loose-lipped to (at worst) her entire offer of friendship being a deception meant to gain and then betray Lucy's confidence.

Although her exact reasons remain a mystery it should be noted that her dialogue and the response from the bullies indicate that she acted alone. When the girl revealed the existence of the puppy she responded that she knew Tomoo and the other bullies would torture the puppy just to torment Lucy. Also, as the orphan little girl seemingly intervened to stop the bullies from harming the puppy further, Tomoo points out that she was the one to reveal the puppy’s existence. The bullies's confusion as to why the little girl would stop their “fun” when she came to them with the information likely means that she was not loose lipped or forced but told them willingly. This would also indicate that she wasn’t working with the bullies but had planned this manipulation herself and the bullies were just her pawns. 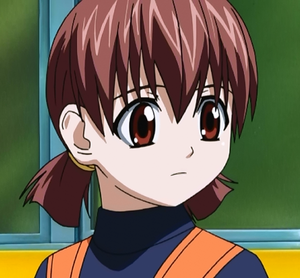 The little girl "reveals" her true nature and her possible Evil Grin. (It may be possible that she was nervous or Kaede was hallucinating.)

Retrieved from "https://villains.fandom.com/wiki/Orphanage_Little_Girl?oldid=3754440"
Community content is available under CC-BY-SA unless otherwise noted.