Leader of the raptor army (formerly)

Preaching about his desire to rule the lost world

Convince all dinosaurs to his rule.

Rule the lost world.
Get revenge on Buck for having him banished then kill him and his allies (all failed).

Orson is the main antagonist of the 2022 Disney+ film, The Ice Age Adventures of Buck Wild, which is a spin-off film of the Ice Age franchise.

He is a Protoceratops with high intelligence who wants to take over the Lost World.

He was voiced by Utkarsh Ambudkar.

Orson is a narcissistic, ruthless, ill-tempered and xenophobic protoceratops with a Napoleon complex due to his desire of ruling the Lost World. He also seems to be an abusive leader as he treats his velociraptors like slaves instead of allies, and he is also shown to hate mammals. This can be caused by the fact that he is smarter than all of the dinosaurs, but his large brain got him bullied as a child.

Orson is a dwarf side protoceratops with crimson red skin. He has an humongous brain growing on the back of his head that reaches almost to his top forehead. He has long sharp claws that are long enough to make sparks giving him the ability to make fire.

When he was young, Orson was constantly bullied for the massive brain on the back of his head (Which just so happened to be his brain). That would make him have a superiority complex and also lead to causing havoc in the Lost World, but he was eventually defeated and banished to Volcano Island by Buck and his crew. Blaming the weasel for interrupting his moment of glory and his newfound ego, Orson swore to have revenge on him and that he would rule the Lost World as Orson started to plan his revenge for years until recruiting his army of velociraptors after discovering their love of fire.

Orson later reappears in the middle of a cave where Buck, Crash and Eddie was inside, he orders his Raptors to eat Crash and Eddie but they escapes the Lost World after visiting it years ago and they wanted to live a life of adventures with Buck. However, Buck saves them while flying on his pterodactyl Penelope. Orson later closes the door of Buck's cave with a giant rock and starts explaining his plan and that the Lost World should be only for lost creatures like dinosaurs and that he plans to use his new army to rule the Dinosaur World. Later, Orson succeeds to knock off Buck but Zee manage to find Momma T-Rex so they can help them in the battle while Crash and Eddie distracts the Raptors by playing dead.

Orson locks Buck in a wooden cage and prepares to execute him in front of everyone by feeding him to his Raptors but Zee, Crash and Eddie saves him and begins a fight. Later Manny, Sid, Diego, Ellie and Momma T-Rex joined the fight and began attacking raptors. He fights back against Buck. He was beaten in brain and almost was caught. But he outsmarts Buck and uses fire once again to keep the Raptors under his control ordering them to kill Buck and his friends but they are saved by Crash and Eddie with fire. Manny, Sid, Diego, Ellie and Momma T-Rex later caught Orson and throws him into the other side of the Lost World, as he later faces all the other mammals that are extremely angry with him for his heinous crimes as Crash and Eddie who now has the ability of controlling the Raptors forces them to chase Orson away and treat him like a "chew toy" as he is defeated again for good.

It is unknown what happened to Orson afterwards since he was not seen again after this, but it's likely that he got killed and mauled by his own Raptors. 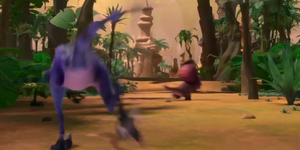 Orson's defeat as he's escaping fron his own Raptors. 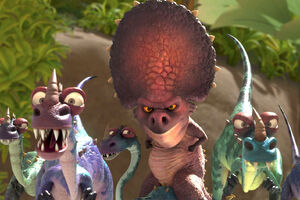 Orson with his army of Raptors.

Orson's sinister laugh as he watches all the animals in peril. 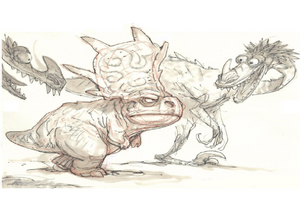 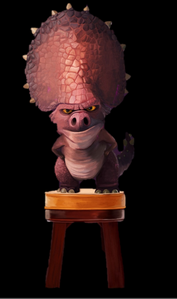