Villains Wiki
Register
Don't have an account?
Sign In
Advertisement
in: Evil from the Past, Cosmic Entity, Honkaiverse Villains,
and 17 more

Overlord of the Vortex

That Which Lies in the Deep
Sea God

Control over the ocean.

Destroy all of Liyue (failed).

Osial, also known as the Overlord of the Vortex, is a major antagonist in Genshin Impact, serving as the final boss of Chapter I, Act III. It is an ancient Hydro god once sealed away within the depths of the sea by Rex Lapis, the Geo Archon, during the Archon War thousands of years ago, but was released by Tartaglia, the Eleventh of the Fatui Harbingers. Fortunately, with help from Ningguang, the Tianquan of the Qixing, it was sealed away for good by crushing it with her Jade Chamber.

Osial was a god that caused anarchy across Liyue. As the master of the sea, it unleashed tempests and tsunamis across the region. Two thousand years prior to the events in the game, Morax, the god of Geo and one of the Seven fought against Osial and defeated the sea monster during the Archon War. Using massive stone spears, Morax sealed away Osial by pinning it to the seafloor, where it laid dormant. The spears used by Morax would become the Guyun Stone Forest.

But in Chapter 1, Act III "Heart of Glaze", Tartaglia uses multiple Sigils of Permission replicated by the Fatui in his plan to lure out Zhongli, the Geo Archon, and obtain his Gnosis. The Sigils awaken Osial, releasing it from its imprisonment. Having not lost its strength despite the two thousand years it was imprisoned, Osial immediately unleashes a powerful storm across all of Liyue. The Qixing and the Adepti then team up to repel the ancient god, using Ningguang's Jade Chamber to confront Osial before it can reach Liyue Harbor.

The Cloud Retainer, Mountain Shaper, and Moon Carver pilot the three Guizhong Ballistas, with the Traveler and the Millelith tasked to guard them as they charged an attack on Osial. While Osial uses its water abilities to blast attacks at the Traveler, portals open up that summon the Fatui that attack the ballistas. Madame Ping, Ganyu, and Xiao bless the Traveler with their energies to give them buffs of power, replenishing health, and speed to defeat the hoard of Skirmishers, Mages, and Agents. If one of the ballistas takes too much damage, the player is forced to restart from the beginning.

Once six minutes and forty seconds pass, the Guizhong Ballistas finish charging and unleash a powerful beam at Osial. However, the god was only slightly damaged and uses multiple beams to destroy the three ballistas and platform, with Xiao saving the Traveler from falling to their death. With no options left, Ningguang chooses to sacrifice the Jade Chamber and has the Traveler plunge their sword into the center of the chamber. It falls from its levitation straight onto Osial, crushing it back to the bottom of the ocean. The Moon Carver tells the others the monster's aura has faded, and it will be some time before it makes any more waves.

In Chapter 1, Act IV "We Will Be Reunited", the Traveler and Dainsleif discover from a talisman that the Abyss Order plotted to fuse the limbs of Osial with a Defiled Statue of the Seven and use the eye of the first Field Tiller as its core, creating an unstoppable god to destroy Celestia. Fortunately, the Traveler and Dainsleif thwart the Abyss Order's plan before they could put it into action. Dainsleif hidden the eye of the first Field Tiller in the safe place where the Abyss Order will never be able to find it thus preventing the Abyss from turning Osial into a cybernetic god.

In the Interlude Chapter "The Crane Returns on the Wind", Beisht, the wife of Osial, attacks the newly constructed Jade Chamber to avenge her husband. With help from the Traveler and Shenhe, she is defeated and retreats back to the ocean.

Osial is a massive five-headed sea serpent made of water. Each head has four eyes and fins across its top and sides. 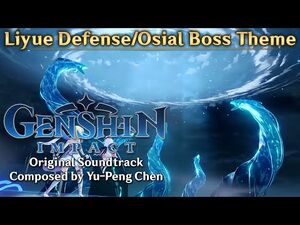