Tempt Coraline to stay in the Other World (failed and abandoned)

The Other Father is an anti-villain, later anti-hero of Laika's 1st full-length animated feature film Coraline. He was created by The Beldam, and was manipulated into luring Coraline to stay forever in the Other World so she could kill Coraline. However, the Other Father secretly wanted to protect Coraline from his creator, making him one of the Beldam's most hated enemies.

He was voiced by John Hodgman. However, his singing voice was provided by John Linnell.

In 2009, the Jones family moved to the Pink Palace Apartments. After realizing that Charlie and Mel Jones had a daughter named Coraline, the Beldam modeled him after Charlie Jones while she modeled herself as Mel Jones. After Coraline was lured into the Other World the first night, the Beldam send her after the Other Father, who was playing the piano. Remembering his role in the Beldam's plans, the Other Father welcomed warmly Coraline and started to play a song about her in the piano, which had hands which controlled him under the orders of the Beldam, but during his song, he attempted subliminally to warn Coraline about the Beldam's true motives. However, Coraline didn't understand his subliminal message and they proceeded to go to dinner with the Beldam before to lay down Coraline.

When Coraline returned to the Other World to rescue her parents from the Beldam's clutches, she saw the Other Father's true form: that of a pumpkin-like creature with vines on his ears. After he was silenced by the Beldam for explaining that there was only a key to the real world, the Beldam dragged him to the garden. Without the Other Father there, Coraline made a deal with the Beldam in order to play a game of finding things: if she won, she could return with her parents to the real world and the Ghost Children could be released and finally pass away with their eyes.

The Other Father holds a strong resemblance to Coraline's real father Charlie Jones, only much more improved. He is clean-shaved, his styled hair a chocolate shade of brown. He wears a red and black evening robe, black pants, glasses and orange monkey-slippers. The only noticable quality he has (that he also shares with every other inhabitant of the Other World) are the matching black buttons instead of eyes.

In the book, the Beldam locks him in the basement, turning him into a slimy, grub like creature. In the film, as punishment for scaring off Coraline earlier, the Other Mother warps his body into resembling that of a pumpkin, a vine from his ear used by the Other Mother to tighten his lip to keep him from talking.

Unlike the Other Mother, the Other Father possesses no supernatural abilities, the various machines and gizmos that he uses being able to use themselves for him.

When transformed into a pumpkin-like creature, he seem to posses superior strength, as he was able to lift Coraline into the air with ease. He was also able to break one of the piano hands that had him trapped with his legs.

On the surface, the Other Father is an exciting, "cooler" version of the real Charlie, making light puns and teasing Coraline as a loving father would, with a perfect relationship with his "wife".

In reality though, the Other Father is a slave to the Beldam, terrified of what she may do and regretful to the point of being traumatized by her. Like the Other Wybie, the Other Father genuinely loves Coraline and wishes he could help her, the only difference being that he is too terrified of the Other Mother to openly defy her. He is however brave enough to defy her when not in her presence and even attempts to subliminally warn Coraline with his song when the two first meet. When transformed into a pumpkin-like creature, he has become even less coherent and aware, but was coherent enough to understand his situation, telling Coraline that he was attacking her against his will, then sacrifices himself while giving her the ghost eye.

Other Father with Other Mother. 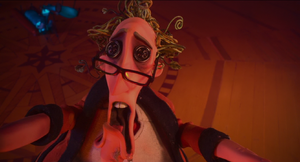 The Other Father as a pumpkin creature.

The Other Father, moments before he fell into the pond and drowned.
Add a photo to this gallery

Retrieved from "https://villains.fandom.com/wiki/Other_Father?oldid=3698660"
Community content is available under CC-BY-SA unless otherwise noted.