Tempt Coraline to stay in the Other World.

The Other Mr. Bobinsky is the secondary antagonist of Laika's first full-length animated feature film Coraline, which is based on the 2002 English dark fantasy children's novel of the same name by Neil Gaiman.

Created by the Beldam, the Other Mr. Bobisnky was used to try to help trick Coraline Jones into staying in the Other World. He was also shown to be the most loyal minion of the Beldam.

He was voiced by Ian McShane, who also played Judas Iscariot in Jesus of Nazareth, Dr. Brinkman in Agent Cody Banks, Iofur Raknison in The Golden Compass, Tai Lung in Kung Fu Panda, Blackbeard in Pirates of the Caribbean: On Stranger Tides, Leigh Emerson in American Horror Story: Asylum and Winston in the John Wick film series.

In the book, Other Bobinsky bears a strong resemblance to the original Mr. B with the exception of having black buttons for eyes. He wore an old-fashioned hat and a trench-coat where he kept his rats.

In the film, on the other hand, Mr. Bobinsky holds a resemblance to Mr. B, but with many improvements. His skin tone is a healthier shade of sky-blue with a large, well-groomed blue mustache and has black buttons for eyes and his weight is focused more around the chest area than the stomach. He is bald, wearing an elaborate, clean-pressed ringmaster's uniform with a hat and gloves.

When Coraline searches his apartment for the ghost-eye (which was used earlier during the mouse circus performance), Another Bobinsky and his circus mice was turned into a living nest of rats.

Whereas Bobinsky was strongly eccentric, Another Bobinsky is far less spoken. Compared to the other residents of the Other World, Other Bobinsky spends the least amount of time on-screen, so the full details of his personality are never given.

When transformed into the hive of rats, his personality is shown to be very aware of the stakes and goads Coraline to forfeit. When Coraline asked the Other Bobinsky if he understood why she would not want to stay in the Other World he admitted that he does not, showing that while he understands the stakes of the game he is so well programmed be the Other Mother that any concept that does not involve the good points of the Other World and winning the game is totally lost on him.

The main rat that wielded the ghost eyes was seen earlier fetching the key for the Other Mother, so it can be assumed that Bobinsky in this form is loyal to the Other Mother. Another interesting thing to note is after his transformation is that unlike the Other Father who spoke very slowly and the Other Spink and Other Forcible who could only call Coraline a theft and demand the ghost-eye they were guarding back, the Other Bobinsky was able to speak in full sentences, albeit somewhat slurred with a heaver Russian accent than the real Mr. Bobinsky.

In the end, the Other Bobinsky is not truly evil in the sense that he is truly a malicious monster, but to the point that he can not comprehend anything beyond the reasons that he was created for.

As Coraline goes upstairs to the Other Mr. Bobinsky's apartment, she sees the remaining clothes of the Other Wybie hanging onto the flagpole. Angry at his sudden death, Coraline shouts at the sky (it is presumed that she was also shouting at the Other Mother as she controlled most of the natural occurrences in the Other World) that she was not scared. Her shouting was so loud that it opened the door of the apartment. Entering the dismal apartment, the Other Mr. Bobinksy appears in front of her and shows her the third ghost eye. However, he snatches it away from her and attempts to lure her to staying in the Other World forever in a distorted voice. Coraline bitterly disagrees with him as she uses her magical stone to search for the ghost-eye as the Other Mr. Bobinksy constantly vanished from one place to another.

Eventually, he entered the circus tent and Coraline discovers that the ghost-eye is located in his hat. The Other Mr. Bobinsky later proclaims to Coraline that he is not who he is anymore in a rather robotic and demonic voice as he disintegrated into a plague of rats. The rats charge fairy flosses at her and when Coraline sees the head rat escaping the apartment with the ghost eye, she tosses her stone at the rat but it was thrown to far away. As she attempts to retrieve her stone, the other rats tie ropes near the doorway which causes her to trip and roll onto the balcony outside. Suddenly, the balcony collapses and she is thrown onto the grass with a tremendous force. Coraline realizes that the final ghost eye was nowhere to be seen and she cries in despair but the cat ultimately gives her the ghost-eye after he captured the head rat and killed it. The grass eventually turns grey and transforms into stone along with the collapsed balcony, the Other Pink Palace and the rest of the Other World. As the game was over, the sky suddenly started to sprinkle but Coraline realizes that the Other World is disintegrating into a white void and she grabs the cat and enters the Other Pink Palace quickly just in time. 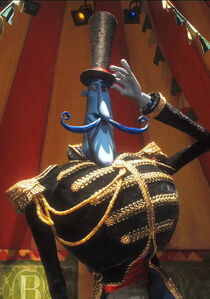 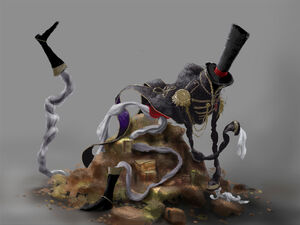 The Other Mr. Bobinsky's suit possessed by his rats. 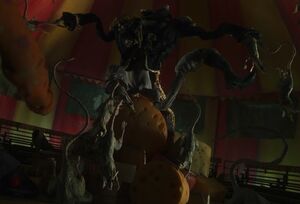 The Other Mr. Bobinsky disintegrated into a plague of rats during the game.