Lure Coraline into staying in the Other World.

The Other Mice ruled by Other Mr. Bobinsky are supporting antagonists of the book and animated film Coraline. They are a group of performing circus mice that Other Mr. Bobinsky and The Beldam use to lure Coraline into staying in the Other World. However, as the façade fails, they are revealed as more malevolent, rat-like beasts.

The mice perform for Coraline and Other Wybie in Other Mr. Bobinsky's circus, entertaining them with cotton candy popcorn, and acrobatics. However, when the Other World's true nature is revealed, the mice sound an alarm.

When Coraline is searching for the ghost-eyes in the mouse circus, each rat individually comprehend their surroundings and know how to use them to their advantage, trying to slow Coraline down with the nearby cotton-candy cannons in the room. After Other Mr. Bobinsky, the Other Mice/Rats attack Coraline. The Other alpha Mouse/Rat tries to escape with the ghost eye, she tosses her stone at the rat but it was thrown to far away. As she attempts to retrieve her stone, the other rats tie ropes near the doorway which causes her to trip and roll onto the balcony outside.

Suddenly, the balcony collapses and she is thrown onto the grass with a tremendous force. Coraline realizes that the final ghost eye was nowhere to be seen and she cries in despair but the cat ultimately gives her the ghost-eye after he killed the Other alpha Mouse/Rat. The grass eventually turns grey and transforms into stone along with the collapsed balcony, the Other Pink Palace and the rest of the Other World. As the game was over, the sky suddenly started to sprinkle but Coraline realizes that the Other World is disintegrating into a white void and she grabs the cat and enters the Other Pink Palace quickly just in time.

When transformed by The Beldam, they appear to be everyday small mice with buttons for eyes. In Other Mr. Bobinsky's circus, they are dressed in circus attire. When killed, they transform back into their original states which are ugly rats filled with sand.

The Beldam transformed the mice to fit the image of her perfect perfect world, so naturally they are very obedient and loyal to her. While their main goal appeared to be to please Coraline it was later revealed that it was primarily to serve The Beldam, turning on Coraline and attacking her when she went searching for the ghost eye in the former circus area.

In the other circus scene, they appear to be very talented in the way that the original Mr. Bobinsky wished that they were. 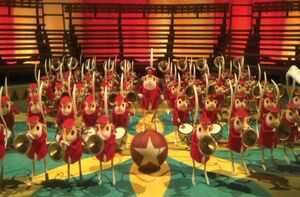 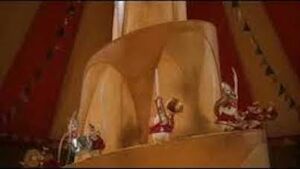 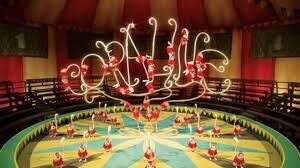 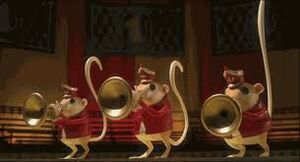 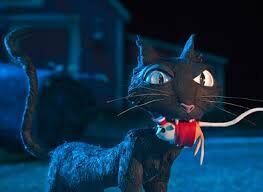 Mouse being caught after trying to alert The Beldam.