Other Spink and Other Forcible

Other April Spink and Other Miriam Forcible

Tempt Coraline to stay in the Other World (failed)

Other April Spink and Other Miriam Forcible are supporting antagonists of the Laika's 1st full-length animated feature film Coraline, which is based on the 2002 English dark fantasy children's novel of the same name by Neil Gaiman. Created by the Beldam, they were used to try to help trick Coraline Jones into staying in the Other World.

Other Spink was voiced by Jennifer Saunders (who also played the Fairy Godmother in Shrek 2), and Other Forcible was voiced by Dawn French.

In the beginning, Other Spink and Other Forcible looked identical to their real counterparts. Other Spink was dressed as a mermaid, her hair tied-back and wearing nothing but an ornate green bra and white trousers beneath her fish-tail. Other Forcible was dressed like Venus from the painting The Birth of Venus, wearing ornate sea-blue bits to cover her breasts and crotch. Both of them possess button eyes, but are painted to look like normal eyes.

When they unzip their "suits", they are revealed to be much younger, each dressed in green and pink striped outfits respectively, their appearance being similar to the posters in the real Spink and Forcible's room from their theatrical days.

During Coraline's game to find the ghost eyes, the Other Mother has combined them into a two-headed taffy creature (an homage to the real Spink and Forcible's interest in ancient, foreign taffy).

During the show, Other Spink and Forcible were believed to possess similar personalities to their originals, and have even been shown to be jealous of each other when the audience applauds the other, but this was most likely a part of the show.

When transformed, they are shown to be inactive until Coraline attempts to take the tall ghost girl's eye (disguised as the pearl on Other Forcible's ring), they latch onto her, shouting at her to "leave", "thief" and "give it back"!

Entering the dark theatre, Coraline spots a torch on the floor and uses it to see her surroundings more clearly. She also discovers that the Other Spink and Forcibles' Scottish Terriers have transformed into vicious dog-bat hybrids. Suddenly, the stagelight turns on by itself and it reveals a giant taffy wrapper hanging from the ceiling.

Climbing onto the stage, Coraline uses her magical stone to search for the second ghost eye and she discovers that it was located within the taffy wrapper. Shoving her hand inside the cocoon, she grabs a pair of hands which were clutching onto the ghost eye. As she nearly removes the ghost eye off from the hands, the Other Spink and Forcible, in their taffy monster form, emerge from the wrapper and yell at her to give back the ghost eye.

Struggling to get the ghost eye off from them, Coraline throws the flashlight onto the dog bats which wakes them up. The bats plan to swoop down on her but Coraline ducks down in time as the bats swoop down onto the Other Spink and Forcible instead and push them away from her. Once they lose control of the Tall Ghost Girl’s eye, their faces and the dog bat faces are left disfigured and they turn grey and lifeless along with their section of the world. 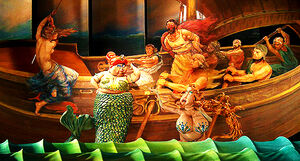 In disguise of their older-selves. 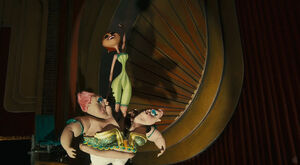 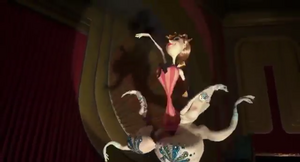 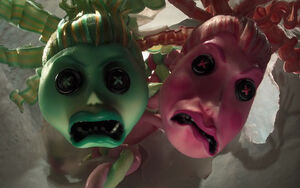 Other Spink and Forcible as a taffy monster. 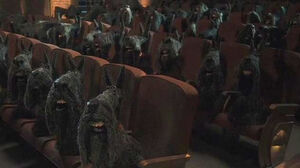 Their audience of Scottish Terriers.

Coraline ducks down from the flying bats, which causes them to attack the Other Spink and Forcible instead, killing them instantly. 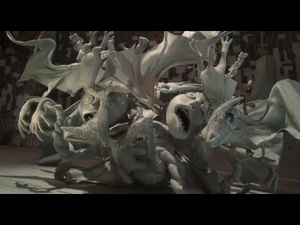 Other Spink and Forcible and their bat winged dogs go gray and lifeless along with their section of the world.