To be rich and to have Wanda to himself.

Otto West is the main antagonist in the 1988 comedy film A Fish Called Wanda. He is a former CIA assassin turned hired gun who is enlisted in a bank robbery, though his true goal is to betray the boss and take the loot for himself. Eventually he also betrays his girlfriend and accomplice Wanda.

He was portrayed by Kevin Kline, who also portrays Rod McCain. Kline won an Oscar for his performance as Otto West.

In spite of his expertise, Otto is incredibly dimwitted and volatile. He likes to think of himself as an intellectual and reads many philosophy books, though he almost always misses their point. He is especially fond of Friedrich Nietzsche. He also has a habit of trying to take charge in difficult situations, usually making them worse. When Archie's wife Wendy finds him in their house, his excuse is that he is a CIA man guarding a KGB defector and "Keeping the public informed," only to have Wendy point out that this is not what a real CIA man would do in that situation. He cannot stand being called stupid, however accurate it may be, and hearing the word is likely to send him into a violent temper.

He is also a bully with a wide sadistic streak, caring little for humans or animals (which he always calls 'insects.') He begins taunting Ken for his stutter the moment they meet, and enjoys mocking him with fake gay come-ons. He enjoys tormenting people, as demonstrated by the torture scene with Ken. He can be incredibly childish, and sends himself into a conniption fit at the least provocation. When Wanda instructs him to apologize to Archie, Otto cannot even bring himself to say the word 'sorry' without raging. In the end he chases Archie down and holds him at gunpoint to make him accept his apology.

In addition, he has a violent, almost pathological hatred of the English, believing them to be, among other things, arrogant, pompous, and intellectually inferior. He shows no other xenophobic traits in the film, but the fact that he ends by going into South Africa's apartheid government indicates he cares little for other races than the English either.

Otto is a former CIA assassin turned hired gun. He enlists himself as a weapons specialist for British bank robber George's plot to steal millions of pounds worth of diamonds, claiming to be the brother of George's girlfriend, Wanda. In reality, Otto and Wanda are lovers, planning to double cross George and take the money for themselves. After the robbery they anonymously tip off the police that George is responsible for the theft, but discover that George, not trusting Otto, has hidden the loot.

In order to find the location of the diamonds, Wanda tries to seduce Archie Leech, George's barrister. She and Archie end up falling in love for real, which the insanely jealous Otto cannot stand. He becomes a nuisance to both of them, frequently breaking in on their love affairs and threatening Archie, at one point dangling him out of a window by his legs.

Eventually, he discovers George's henchman Ken knows where the diamonds are. He ties Ken to a chair and tortures him by shoving french fries up Ken's nose, then eating all of his beloved pet fish alive before his eyes until Ken tells him. Discovering that Wanda has found the key on her own, he kidnaps her and drives her to the airport, intending to take her and the money to Brazil.

Wanda overpowers Otto and boards the plane alone. Archie, having discovered the truth from Ken, confronts Otto at the airport. Otto quickly gains the upper hand and marches Archie onto the tarmac to kill him, unknowingly stepping into wet cement. Archie, seeing this, stalls for time by insulting America. While they argue, Ken commandeers a cement roller and drives toward Otto to avenge his dead fish. Otto, realizing he is trapped and out of ammunition, tries to bargain for his life, but Ken drives over him, squashing him into the cement.

Miraculously, Otto survives this, and is last seen climbing outside the airplane window encrusted with cement glaring at Archie and Wanda inside the plane. He shouts "A**hole!" before the plane's takeoff blows him away. The film's closing text mentions that Otto later moved to apartheid South Africa and became Minister of Justice.

Otto demonstrates his skills with weapons numerous times. He is an expert gunman, knife-thrower, and crossbow user. He is also, presumably, proficient in karate and with the katana, although he is only seen practicing these techniques before a mirror. He is also an expert brawler.

His weakness is his own stupidity and recklessness. He tends to rush into a situation without any plan other than shooting or punching first, asking questions later. This is frequently his undoing, as he demonstrates at the end of the film by walking right into a patch of wet cement. 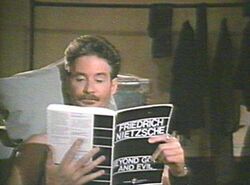 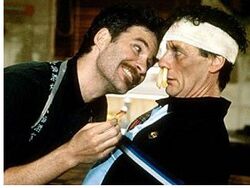 Otto gets his comeuppance
Add a photo to this gallery
Retrieved from "https://villains.fandom.com/wiki/Otto_West?oldid=3706106"
Community content is available under CC-BY-SA unless otherwise noted.