Ottomo is a member of the Medici Mafia family and a minor antagonist in the indie fighting game Skullgirls.

Ottomo is one of Lorenzo's henchmen. His mechanical body is used by Tom, a small, irritable Dagonian engineer. A former member of Anti-Skullgirl Labs, Tom sold his services to the Medici Mafia before stealing a Mighty Metal Man suit. Tom himself is a man of many vices, but Ottomo is far more classy.

Ottomo appears as a background character in Medici Tower, and his head is seen in Peacock's ending on Avery's knife. 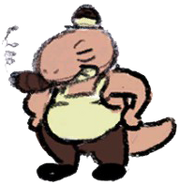