Leading the Port Mafia to dominate the city.

Mob Leader
Ōgai Mori (In Japanese: 森 鴎外, Mori Ōgai) is the leader of the Port Mafia and the main antagonist of Bungou Stray Dogs. Despite his status as the boss, he is rarely the lead antagonist. He is a fictionalized version of the Japanese author with the same pen name.

As expected of a mob boss, Ougai is analytical and tactical. He often puts on overdramatic acts but rarely breaks his composure internally.

He has been shown to be somewhat ruthless and unfaltering when it comes to violence. He hasn't, however, shown any particular enjoyment from killing. His ruthlessness comes from his pragmaticism.

Although he can be intimidating at times and emit a scary formal aura, he is often polite to the point of seeming approachable. He is polite to allies and enemies alike.

He has a kind side to him when it comes to Elise. He acts as a father figure and cares for her to the point of spoiling her. He hasn't shown to be strict with Elise, and will nearly always comply when Elise complains.

He has a strange and somewhat disturbing obsession with girls under the age of 12, including Elise.

At some point in the past, he ran an underground clinic and had a partnership with Yukichi Fukazawa, a bodyguard of the clinic. The clinic existed to supply aid to runaways from the law that couldn't get normal medical aid.

Later, Ougai joined the Port Mafia as a normal member. When he joined, the current leader was old and suffering from some mental issues that caused him to make rash decisions. The current leader's state was causing harm to the mafia, so Ougai killed the leader and took control of the mafia himself.

He also has superhuman reflexes and has been described to be extremely logical. 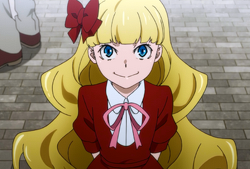 Elise, the special ability of Ougai, 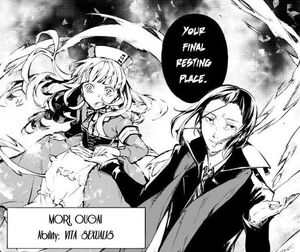 Ougai's ability activation
Add a photo to this gallery
Retrieved from "https://villains.fandom.com/wiki/Ougai_Mori?oldid=3551366"
Community content is available under CC-BY-SA unless otherwise noted.