The Beauty and the Beast Unit

Equipment
Vehicles similar to that of the US Military

Defeat the Patriots and all in their way of doing so, specifically certain militia and Solid Snake.

Outer Heaven is the main antagonistic faction of Metal Gear Solid 4: Guns of the Patriots. It is an organization formed from the five largest private military companies in the world (thus its nickname The Big Five), formed in 2014 by the international terrorist Liquid Ocelot, the "hybrid" of Liquid Snake and Revolver Ocelot. It took place during Liquid's Insurrection against the Patriots.

As stated above, its name is taken directly from Big Boss's PMC from Metal Gear, Outer Heaven.

By the 2010s, the Patriots established control over the war economy, being a worldwide economical structure that turned war into business. Liquid Snake, the "hybrid" of the two global terrorists Liquid Snake and Revolver Ocelot, sought to take over the Patriot's ultimate system of artificial intelligences, when in reality he wanted to destroy it to flood the world with anarchy. Liquid pretended to work on the Patriots' side by organizing the world's largest private military companies and merge it into one, waging proxy wars with the large PMCs so the war economy wouldn't fail. The formation of the PMCs was entitled Outer Heaven, named after Big Boss's nation seeking to fulfill his idealogy.

In 2014, Liquid finally built Outer Heaven up enough to efficiently fight and defeat the Patriots. As such, he took over the SOP system, a complex system owned by the Patriots and injected into all soldiers - including his own and the US military - to turn them into emotionless killing machines on command. With control over the SOP, not even the US military could rival Outer Heaven, and victory was in Liquid's hands. This was until Solid Snake, Liquid's mercenary "brother" and nemesis, along with the help of the nearly defeated US army, destroyed the Patriots' and their system, rendering all of Liquid's soldiers either dead or mentally incapable of fighting. After the Patriots' and Liquid's death, the five subdivisions that made up Outer Heaven split up.

The Praying Mantis unit was a British PMC stationed in Middle East, which was both the headquarters for Liquid Ocelot and the hometown of a militia. The militia became a rebellion and Outer Heaven's worst enemy was formed. War raged between the two militaries during the time former FOXHOUND agent Solid Snake was sent to assassinate Liquid, thus forcing the operative to sneak through an active battlefield. Almost all of the Praying Mantis soldiers were either killed or put into a coma when Liquid hijacked the SOP system, pouring out all of the soldier's nerves and emotions, causing them to have a severe mental breakdown. They utilized Gekkos to help them fight the militia.

French for Octopus Armament, the PA were stationed in a South American jungle where they too fought an army of militia. They were supervised by Naomi Hunter and Vamp until, like the Praying Mantis PMC, a majority of their ranks were killed when the SOP system began acting up again. They were assisted by Laughing Octopus during battle at times. Their ad's narration implied that the group had a very nihilistic outlook, as they inferred that the sole point of life is to die, and even claiming that life was overrated.

The Raven Sword PMC were stationed in a European city where they acted as police officers, being the ID inspectors for newcomers to enter the city. Patrolling the city, they were assigned to stop Paradise Lost Army, a militia led by Big Mama, also known as EVA (the lover of Big Boss). They assisted Raging Raven in her mission to destroy Solid Snake and capture Big Boss' corpse, which was protected by the Paradise Lost Army.

The actual ranks of the Werewolf PMC were never witnessed in Guns of the Patriots. Instead, Gekkos and Dwarf Gekkos were stationed at Shadow Moses Island instead of real soldiers, but a squad of Haven Troopers did back up Crying Wolf when Solid Snake was sent to find Metal Gear REX.

Russian for Clawing Ocelot, the PMC, like the Werewolf, makes no appearance in Guns of the Patriots, and are simply referenced to.

The Beauty and the Beast unit were a squad of elite troopers, all mentally deranged women with traumatizing pasts, and each based after a Sons of Big Boss member, their weapons are based on a Dead Cell member, and their emotions are based on one or two members of the Cobra Unit. They were also armed with animal-like battle suits. They were all either killed or defeated by Solid Snake (their fates being player dependent) when they were sent to assassinate him.

The Haven Troopers, also called FROGs, were a military of all-female soldiers mechanically modified to have extreme agility, speed, and stamina, thus their nickname. They were the personal bodyguards of Liquid, but also assisted every Beauty and the Beast member in their attempts to kill Solid Snake. Every soldier was either killed or driven insane when GW was destroyed. 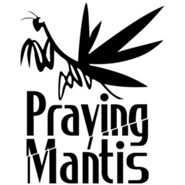 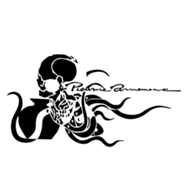 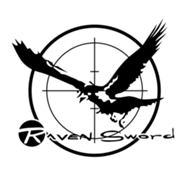 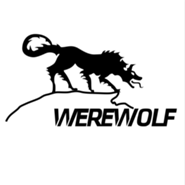 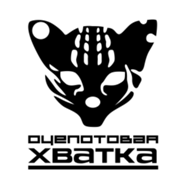 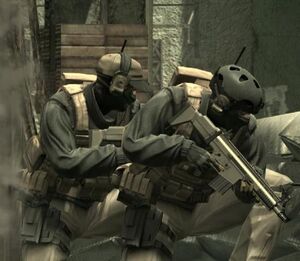 A duo of Praying Mantis soldiers. 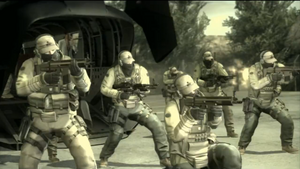 A squad of Pieuvre Armement soldiers.