Reclaim the Pride Lands for themselves (formerly; abandoned).

The Outsiders (also known as Outlanders) are the main antagonist faction of the 1998 animated Disney film The Lion King II: Simba's Pride (the sequel to Disney's 32nd full-length animated feature film The Lion King) and guest antagonists in its midquel television series The Lion Guard.

They were an offshoot of the Pridelanders; a pride of lionesses (as well as two known male lions: Nuka and Kovu) that remained loyal to Scar after his death. Scar's nephew Simba banished them to the Outlands, a near-waterless wasteland neighboring the Pride Lands. The pride eventually disbands and its members become Pridelanders again at the end of the film.

According to Rafiki's story in "Lions of the Outlands", after Simba defeated Scar and became King of the Pride Lands, Zira approached him and said that he couldn't be king as Scar had chosen her son Kovu to succeed him. When Simba replied that Scar was not the true king, an enraged Zira attacked him. Simba won the battle and was left with no choice but to banish Zira, her children and her followers from the Pride Lands.

During their banishment, the Outsiders resided in a wasteland known as the Outlands. Among their members included their leader Zira and her three children: her sons Nuka and Kovu and daughter Vitani as well as a substantial number of lionesses. Altogether, their pride seems to be equal in number to Simba's pride, the Pridelanders. The name "Outsiders" most likely comes from the fact that they live in the Outlands, as well as the fact that they were exiled from the Pridelanders.

As a whole, they are much skinnier than the Pridelanders, and many of the lionesses are of darker coloration than that of the Pridelanders. Interestingly, although Zira and her children are the only Outsiders with speaking roles, several individual members can be identified throughout the film by different markings on their bodies.

The leader of the Outsiders was Zira, who was a fanatical follower of Scar and the mother of Nuka, Vitani, and Kovu. In the end, all the Outsiders (with the exception of Nuka, who dies during an ambush on Simba, and Zira, who dies after the climactic battle against the Pridelanders) join Simba's pride. They are also referred to as "Scar's pride" or "Zira's pride."

As almost all of the Outsiders are shown to be female, Nuka and Kovu are the only two males seen in the pride. According to Zira, Kovu was the lastborn before they were exiled.

Most of the Outsiders appear in background scenes, following Zira's orders. The pride first appears as Zira is bringing Kovu home. They are present years later as Zira lays out her plan to kill Simba by allowing Kovu to get close to Simba's daughter, Kiara. Later on, when it appears that Kovu is growing reluctant in his quest to kill Simba, the Outsiders ambush the two when Simba is alone with Kovu. They pursue Simba, but he manages to escape. In the aftermath, Nuka is killed after being crushed under fallen logs, and the pride is shown mourning his death and Zira blames Kovu for it and scratches him in the face giving him a scar across his eye like Scar's. Kovu declares he wants nothing more to do with Scar and leaves, the lionesses prepare to give chase, but Zira tells them to let him go saying Simba has corrupted him. Zira reveals her plans for a direct attack on Simba, which pleases the lionesses.

The Outsiders head towards the Pride Lands, traveling through a muddy river on the way. They are confronted by Simba and his pride, and a major battle breaks out between the two prides. Thanks to Zira's constant orders, the Outsiders gain the upper hand, and begin swarming Simba. However, they back off when Zira prepares to go one on one with Simba. Later, they are shocked when Kovu and Kiara interrupt the fight. Kiara's reasoning about stopping the fight seems to get the pride's attention. Seeing the truth of Kiara's words, Vitani defects from Zira. When Zira threatens to kill Vitani for her defection, the rest of the Outsiders is sickened enough that they defect as well. Zira attempts to attack Simba anyway, but is countered by Kiara. After Zira dies by falling into the river, the rest of the Outsiders are allowed to return to Pride Rock along with Simba. There, they watch as Kovu and Kiara are united in marriage. Finally, the Outsiders remained as part of Simba's pride.

They served as supporting antagonists in the episode Lions of the Outlands, which takes place during the timeline of Simba's Pride, after Kovu's encounter with Kiara, and before the Outsiders attack the Pride Lands.

In the episode, the Outsiders along with Zira and her children, move to another part of the Outlands and take a waterhole from a clan of hyenas. One of the hyenas named Jasiri goes to her friend Kion (who is Simba's son and the leader of The Lion Guard) for help. Having never been told about the Outsiders' banishment, Kion, confused as to why there are lions in the Outlands, goes with Jasiri to talk to Zira.

Upon learning that Kion is Simba's son and leader of the Lion Guard and could possibly get the Outsiders back in the Pride Lands, Zira (who knew of Scar's time of leading it) takes him to talk privately. After arriving at a private area, the Outsider lionesses appear and surround Kion. Zira reveals to Kion that she was close to Scar, who told her about the Roar of the Elders and he lost it after using it on his fellow lions. She also tells Kion that if it hadn't been for Simba, Scar would still be king. When Kion tells Zira that Scar was never the true king (which Simba himself had told Zira prior to banishing her), she orders the lionesses to attack him, but almost immediately calls the attack off, deciding to let Kion have a chance to decide whether to side with the Outsiders or Jasiri's clan.

Upon noticing that they outnumber the Lion Guard and Jasiri, Zira and the Outsiders prepare to fight back. Bunga urges Kion to use the Roar on them, but Kion tells him that if he uses it on fellow lions, he will lose it like Scar did. However, Bunga replies that Scar lost the Roar because he used it for evil. Upon hearing this, Kion tells Zira and the Outsiders that as long as he is around, they are not welcome in the Pride Lands or the Outlands, before using the Roar to blast the Outsiders away (with the exception of Kovu, who dodges the blast, before going after his family) and they land at termite mounts similar to the ones they lived at during Simba's Pride. 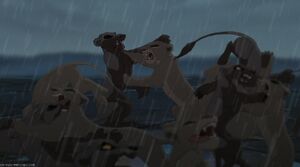 The war between the Outsiders and the Pridelanders. 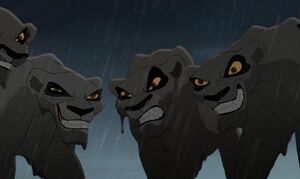 Outsiders growling with hunger as they corner Timon and Pumba. 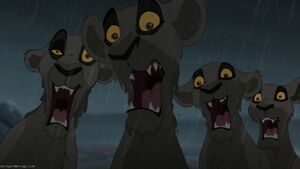 The Outsiders screaming as they flee from Timon and Pumbaa. 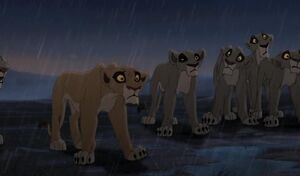 Vitani and the Outsiders are stopped and no longer fight. 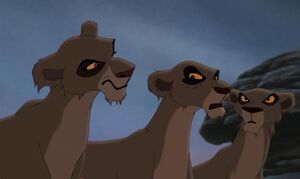 The Outsiders reforming as they no longer follow Zira. 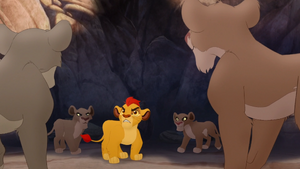 The Outsiders in The Lion Guard. 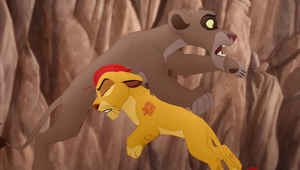 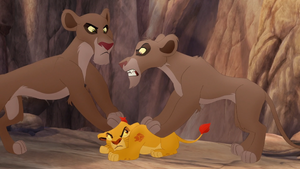 Retrieved from "https://villains.fandom.com/wiki/Outsiders?oldid=4085389"
Community content is available under CC-BY-SA unless otherwise noted.