Destroying those who stand in his way.

Overdrive is a fictional comic book supervillain, appearing in books published by Marvel Comics, usually as an enemy of Spider-Man. Created by Dan Slott, and Phil Jimenez, Overdrive first appeared in Amazing Spider-Man: Swing Shift (May 2007), a Free Comic Book Day issue set after the events of the Spider-Man: One More Day storyline.

Overdrive was hired by Mister Negative to steal an artifact from a museum, but was unable to deliver it because of interference from Spider-Man. Overdrive led Spider-Man on a high-speed chase through the streets of Manhattan. When Spider-Man smashed the windshield of Overdrive's car, it revealed dozens of pieces of Spider-Man-related merchandise such as bobble-heads, air-fresheners, and action figures. Overdrive declared that he was Spider-Man's "biggest fan", even asking for an autograph as Spider-Man was trying to stop him.

The chase finally culminated in a car-wreck that had Overdrive and his vehicle hanging from a bridge in New York by Spider-Man's webbing with Spider-Man's trademark note, "Courtesy of your friendly neighborhood Spider-Man". Overdrive asked the police who were on the scene to arrest him if he could keep the note. Overdrive was then sent by Mister Negative to steal the Sonic Pulse Generator from a laboratory but he failed again when he met Spider-Man once again. Mister Negative told his men to dispose of Overdrive and they put him in the trunk of Mister Negative's limo and Overdrive was able to escape them by converting the limo into one of his "tricked out" cars.

Ever since Lily Hollister's baby was stolen by the Chameleon, Spider-Man had been going on a rampage against any villains involved. The police recovered a web ball containing Overdrive, Spot, and Diablo.

Peter Parker later sees Overdrive kidnapping Terri Hilman, the daughter of a powerful socialite. Since his costume is dirty after the battle with Doctor Octopus, Peter is forced to use a Halloween Spider-Man costume. Overdrive transforms the limousine he is driving into a copy of the Spider-Mobile. He then shoots Peter with webs pinning him into a wall. However, Peter manages to take Overdrive out from the car and leave him hanging for the police.

As part of the Marvel NOW! event, Overdrive was hired by Boomerang to be a part of his version of the Sinister Six. Overdrive stole the original Big Wheel vehicle and upgraded it through his powers. However, the Superior Spider-Man (Doctor Octopus' mind in Peter Parker's body) defeated Overdrive and the rest of the Sinister Six using a power dampening field that caused Overdrive's nano-bacteria to shut down. Overdrive features as one of the main characters in Superior Foes of Spider-Man.

Through nano-bacteria, Overdrive can alter motor vehicles to his liking. He has given them limited flight and more powerful motors. It is unknown how well his power works on other vehicles. It is also unknown if the bacteria are released from Overdrive himself or his costume. 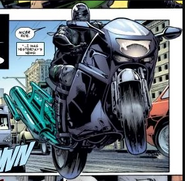