General of the Nazi regime

All of Supergirl's powers:

Save herself from dying.
Kill Kara Danvers from Earth-38.
Make Barry Allen suffer (all failed).

Kara Zor-El, also known as Overgirl, is the secondary antagonist of the Arrowverse crossover "Crisis on Earth-X" and the main antagonist in the web series Freedom Fighters: The Ray. She is a general from the Nazi-conquered alternate version of the Arrowverse's Earth-1 known as Earth-X and the wife of the Earth-X version of Oliver Queen, Dark Arrow.

Kara's pod crash-landed on Earth from the planet Krypton, just like the Earth-38 Kara. But instead of Midvale, like her counterpart, she landed in "the Fatherland," a territory ruled by the Third Reich. She would be raised in this world and grow to embrace hate and evil. She would adopt the name Overgirl.

Along with her husband, Oliver Queen (aka Dark Arrow, an evil counterpart to Earth-1's Green Arrow), and Eobard Thawne (Reverse Flash) from Earth-1, they would rule modern-day Earth-X with an iron fist. However, Overgirl would take in too much solar radiation. Thus, she was dying. She needed a heart transplant from Earth-38's Supergirl.

During Barry Allen and Iris West's wedding, the Third Reich from Earth-X would invade Earth-1. After a few battles, they capture Supergirl, her sister, Alex Danvers, and many of Earth-1's heroes, bringing them to a concentration camp on Earth-X, with the exception of Supergirl, whom they take to Earth-1's STAR Labs.

While strapped to an operating table and bathing in artificial Red Sun rays, Overgirl and Supergirl argue over ideologies and express how each one felt the other is wasting her potential. While Supergirl tells her she should have spent her time helping humans and setting a good example, Overgirl counters by saying she should have ruled her planet and brought order to it.

Supergirl is initially saved by Iris West and Felicity Smoak, but is captured again, this time along with her attempted rescuers. Thawne then tries to carve Supergirl's heart from her body so that he can place it into Overgirl's but is thwarted by Ray Palmer, the Atom, who, along with Felicity and Earth-1's Oliver Queen, rescue Supergirl. However, this time, Oliver threatens Overgirl to either let them go, or he will cut her throat, although Oliver gives his Earth-X counterpart a chance to save Overgirl with the help of STAR Labs. Thawne rescues both Overgirl and Dark Arrow, and the villains ultimately retreat.

During her final conflict with Supergirl, the solar radiation within Overgirl's body begins to overload and starts to build up to detonation, essentially turning her into a bomb getting ready to explode. In a large, atomic explosion in orbit, after Supergirl flies her up high enough so that she won't harm anyone else, Overgirl dies. Dark Arrow would try to kill Oliver Queen to avenge her and make sure she didn't die for nothing, but Oliver shoots him in the heart with an arrow, saving Earth-1, and making sure Overgirl's death is in vain. 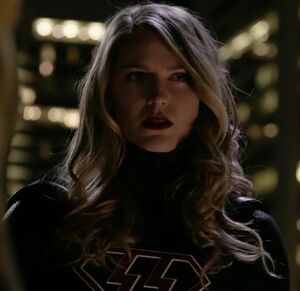 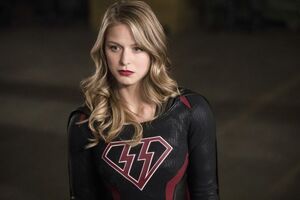 Speaking to her captives 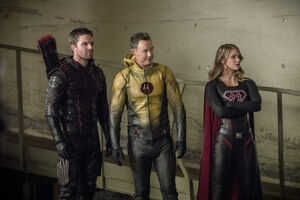 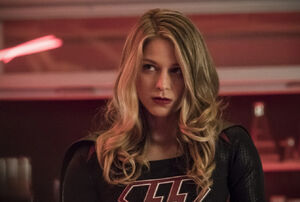 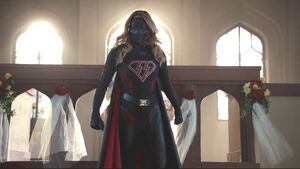 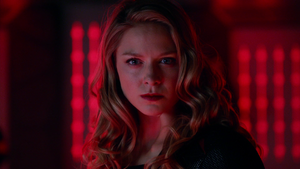 Kara, acting as captain of the New Reich warship, The Wellenreiter 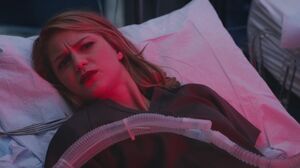 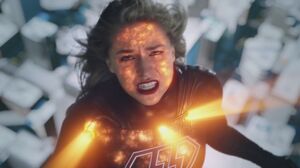