Overload is a Shakespearean-mannered Decepticon spy from Transformers: Robots in Disguise.

During the war on Cybertron, Overload was the top spy for the Decepticons and his work resulted in the destruction of a number of Autobot installations. Once, he shot a Cyclone at a young Slipstream, which stole his first ball bearing, causing him to go live a life a crime. Eventually, Optimus Prime found Overload out and stopped him, but not before the Decepticon inflicted some sort of injury on a young Bumblebee, sparking a grudge against him. He was placed in stasis and eventually stored aboard the Alchemor. When the ship crashed on Earth, his stasis pod was lost.

After reviving from stasis, Overload sensed Optimus Prime and went looking for his old foe. Arriving in the scrapyard, he found only Bumblebee, Strongarm and Grimlock. He dealt with them and opted to head for Crown City, reasoning he could draw out Prime by threatening humans, and on the way teamed up with the Cyclone Mini-Cons Backtrack and Ransack.

Overload found a human vehicle which he began smashing as a warm up to the main show, until Bumblebee found him. Though Overload proved more than a match for the Autobot, Bumblebee managed to turn the two Mini-Cons on him, and render him unconscious with a punch. Overload was carted back to the scrapyard to get stored away. 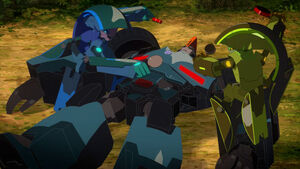 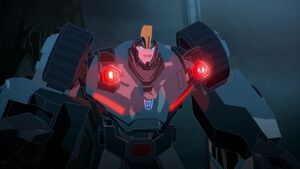 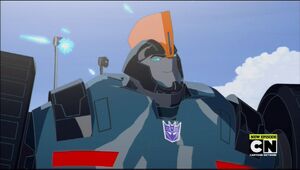 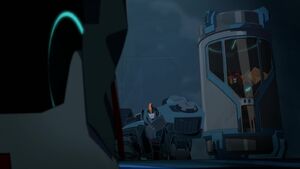