Stalking, parodying songs, making sure her one true love never leaves her.

Find love, and never let him leave her.

Obsessed Stalker
Overly Attached Girlfriend is a character portrayed by Laina Morris in online videos, the face of whom has famously been used as an advice animal image macro featuring webcam picture, feayuring various captions portraying her in the stereotype of an overprotective and clingy girlfriend.

On the following day of June 7, Redditor yeahhtoast submitted a link to the YouTube video in a thread titled “Overly Attached Girlfriend,” which generated more than 800 comments in the span of seven hours as well as a Quickmeme page for an advice animal character bearing the same name. Arising from the success of the video, 'OAG' became an Internet meme that features the image macro of a young woman featured in the video, smiling and staring manically at the camera that has been captioned in a way that portrays her to be a stalker, jealous, or committed to her love interest to an unhealthy degree.

In several of her videos (The Cup Song, Dear Santa, Make Him a Sandwich), she shows that she laces her "boyfriends"'s food with "poison", which keeps him in a state of being unable to escape her or shout out for help, so that he will "love her for ever", and she will never let him go.

In the Valentines Day video, it is revealed that she keeps her current boyfriend duct taped to a chair, and feeds him on poison-laced (see 'Dear Santa' video) heart-shaped cookies to symbolise their "love". During this video, when he escapes from the chair, she runs outside after him, and is seen returning into her house through the window covered in mud and blood, heavily implying that she murdered him for leaving her.

Similarly, in the video 'I Like Long Walks', it is revealed that she stalked a guy (who she considered to be her boyfriend, although he had never actually met her) everywhere he went for "3 or 4 weeks". It is heavily implied that she murdered him once he noticed that she was stalking him, as she remarked in this video "it's a shame what happened to him."

Only one of her boyfriends has ever been seen in person, in the video 'Beyond Attached', in which he has already broken up with her, but she steals his things to force him back into her life. She also notes that she had been collecting his hairs strand by strand, and "made a new hair color" with them, to which he replied "All of those words are horrible."

In this video, while she and he fight over a socket, she ends up within her ex-boyfriend's body. She takes a disturbing amount of pleasure in this, feeling herself and remarking about how she is closer to him than ever now (in his body), and she can always keep an eye on him through his eyes.

After he (in Laina's body) eventually convinces her to let them both electrocute one another, it appears that the two swap back, until his thoughts are heard in Laina's voice. However, in all future videos, Laina appears again in her own body. 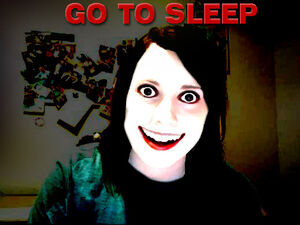 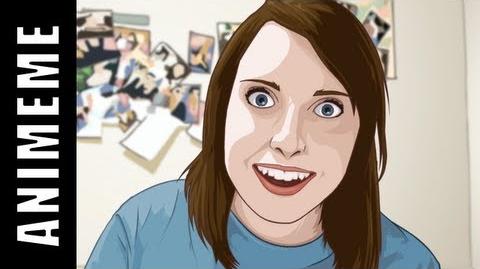