Overman is the name of at least two different alternate reality versions of Superman. The first is one that appeared in DC Comic's "Earth 10" universe, a variant on the Pre-Crisis "Earth X". Whereas Earth X merely showed a Nazi victory after World War Two, in Earth 10 Overman is the Nazi agent of a long-dominant Third Reich and supports the Nazi Party's ideology of genetic purity.

Two conflicting artistic renditions of this Superman have been shown. One is a stereotypical blonde Aryan with a Nazi swastika replacing the S-shield, while the other is a black-haired twin of the standard Superman with an "S" resembling one from the Schutzstaffel emblem.

A completely different rendition showed up in the pages of Animal Man, and may have been generated by the madness of Psycho-Pirate, who at that time was the only mortal to remember the multiverse that existed prior to the Crisis On Infinite Earths, knowledge which made him more unstable than normal. This Overman, whatever his true existence, is said to come from a world where all heroes were the creations of US Government experiments, Overman being the first, and all other heroes created from his DNA in further experiments. It is by description a grim world made grimmer by his presence, and mostly destroyed by him.

In the midst of Psycho-Pirate's rambling narrative, Overman emerges, armed with the super-bomb he used to destroy his own world. His insanity was so apparent and repulsive, the pre-Crisis version of Ultraman feared him and decided to fight against him. Normally, Ultraman, another dark version of Superman, was brutal and somewhat murderous himself, but Psycho-Pirate had recreated him after his death in Crisis, wherein he chose to die trying to save the world he once tormented.

Whether through his actual powers, or through Psycho-Pirate's narration of him as unstoppable, the assembled AU heroes and villains could not stand against him as he babbled and threatened to set off the bomb. Animal Man, who had been sent on a torturous journey through time and space, came to the temporary realization of his status as a comic book character, and trapped Overman between two comic book panels, which he constricted until Overman was destroyed, whining that it wasn't his fault he was a monster, since he had been created that way. Animal Man then simply hit the off switch on the bomb Overman had tried to use.

The Overman of Earth 10. 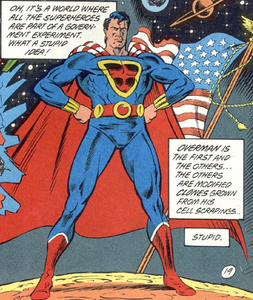 The black-haired Superman twin of Earth 17.