Roving Vice Overseer of the Abbey of the Everyman in Karnaca

Equipped with sword, pistol and grenade

Disecting the corpses of Herectis to find the center of heresy.

Eliminating the heretics at the Conservatory.

Roving Vice Overseer Álvaro Cardoza, also known as Overseer Cardoza, is the secondary antagonist in Dishonored: Death of the Outsider. He is encountered in the mission The Stolen Archive.

Cardoza is a Roving Vice Overseer in special mission in Karnaca and is responsible for the re-taking of the Royal Conservatory and the torture and interrogation of the remaining Brigmore Witches. While the Overseers deal with the witches, their partners - the Oracular Order led by Sister Rosewyn - search for heretical artefacts. Upon finding an extremely heretical archive that could bring down the Abbey, she tasks Cardoza with destroying it. Before he can do so, however, the archive is stolen by Billie Lurk.

He is voiced by Michael Manuel.

As every Overseer, Cardoza joined the Abbey of the Everyman as a child and was subject to their trials and indoctrination. During his time in the Abbey, Cardoza taught field tactics on the Peninsula to fellow overseers like Overseer Abello.

Despite hating the followers of the Outsider and viewing them as heretics, Cardoza also became interested in the changes heresy caused to the bodies of the heretics. Cardoza started studying these changes and even wrote the book "The Corroded Mind" in which he detailed his research. Vardoza wrote that there is anatomical evidence that the mind itself deteriorates under the Outsider's influence, citing examples of a yougn woman who fell into corruption by mere belief in the Outside -causing her to slaughter animals for rituals, wishing harm to others through heretical spells and more. After Cardoza performed an autopsy on the woman, he found her mind to be visibly divided and corrroded beyond repair.

Cardoza eventually reached the rank of Roving Vice Overseer. In this position, Cardoza was approached by Sister Rosewyn of the Oracular Order. Rosewyn informed him that a group of witches had taken over the Royal Conservatory in Karnaca during Delilah's reign and had built a device known as the Oraculum - which could influence the visions and prophecies of the Oracular Sisters. Rosewyn intended to cleanse the conservatory of heretics and heretical artefacts alike and requested the assistance of Cardoza and his Overseers. As the witches had lost their magic powers due to Emily Kaldwin's sabotage the Oraculum, they were easy targets for the Overseers and were either killed or captured as the Overseers retook the Conservatory.

When the Conservatory was secured, Cardoza closed off the cellar where he built a holding cell and an interrogation room. Inside the interrogation room were several musical chairs which played the cleansing mathematical music of the Overseers to those in the chairs, causing incredible harm to the witches strapped to the chairs. While interrogating the witches, Cardoza tried to obtain information about their powers and the Outsider but did not learn much. After the witches died of the interrogation, Cardoza also disected their corpses in his laboratory in the former curator's office. All but one witches died of the torture, the remaining survivor remained imprisoned in the holding cell.

Although not voicing his concerns openly, Cardoza was unhappy with Sister Rosewyn's decision to burn all of the witches' books and papers immediately as he had already glimpsed wonders in their pages and would prefer to read the tomes before destroying them - this would allow them to know the enemy better and would allow to understand their corrupt thoughs. Although the knew that this was heresy, Cardoza thought about preserving a few tomes from the fire.

While the Overseers and Oracular Sisters clean up the Royal Conservatory, Billie Lurk infiltrates the building to steal a silvergraph archive that is hidden in the Conservatory. Unbeknownst to her, the archive has already been found by the sisters and is in possession of Lena Rosewyn. Lurk can also find several logs of Cardoza's interrogations and find the corpses of the witches he tortured and disected.

When Billie arrives at the Curator's office, she witnesses an Oracular Sister talking to Cardoza, who is disecting a dead witch. The sister informs him that Sister Rosewyn is awaiting him on the terrace.

After briefly resuming his experiments, Cardoza heads out to the terrace where he meets with Sister Rosewyn. Rosewyn informs him that she has studied the silvergraph archive and that it contains deeply heretical knowledge that could destroy everything the Abbey has achieved so far. She hands to archive to Cardoza and orders him to destroy it immediately. After taking the silvergraph, Cardoza heads back into the Conservatory.

However, having gotten curious about the silvergraph's content, Cardoza decides to take a look at the contents first before destroying it. To do so, Cardoza heads down into the Conservatory and makes his way down to the main floor of the Conservatory where he enters a meeting room. He tells the Overseer inside to leave the room and then inserts the silvergraph into a projector. By doing so, he sees that the silvergraph contains a map to a mining company on Shindaerey Peak. In contrast to Billie, who knows that the place is the headquarter of the Cult of the Outsider and that it is possible to enter the Void there, Cardoza does not understand the importance of the information and wonders why Rosewyn would consider it heretical.

In contrast to most characters in the Dishonored franchise, it is not necessary to neutralize Cardoza lethally or non-lethally. As Billie's objective only is to obtain the silvergraph, Billie can obtain the silvergraph from Sister Rosewyn without ever meeting Cardoza. However, there are multiple ways to use Cardoza to actually obtain the Silvergraph.

Of course, Billie can also openly confront and attack Cardoza and fight and kill him, taking the silvergraph from his corpse. Another way to obtain the silvergraph is to actually impersonate Cardoza.

Billie can use her Semblance ability to create a supernatural disguise of Cardoza. Impersonating Cardoza, Billie can then walk onto the terrace and talk to Sister Rosewyn. As Rosewyn believes Billie to be Cardoza, she will hand her the silvergraph and tell her to destroy it immediately.

Although it is not neccessary to deal with Cardoza, there is a black market contract available which pays Billie for eliminating him and the Order. The contractor of the contract "Álvaro and the Abbey" wants Billie to kill every Overseer and Oracular Sister in the Conservatory save Cardoza. Instead of killing Cardoza, Billie is supposed to knock him out and strap him to one of his own musical chairs as revenge for all those Cardoza tortured and murdered in this chair. If Billie chooses to do so, the mission debriefing will reveal that Cardoza was tortured in the chair - his ultimate fate is left unknown, however. 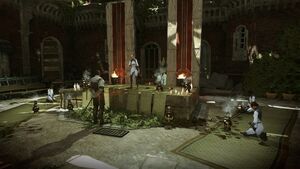 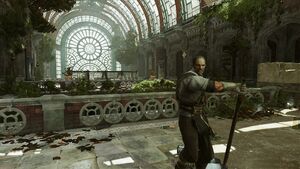 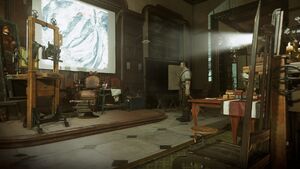 Cardoza watches the map on the silvergraph