Leader of the Wolves

Raiding camps with his group.
Mutilating dead bodies and carving into people's foreheads.

Hunt and brutally kill survivors and take their supplies.

Kill Morgan Jones and everybody in Alexandria (formerly).
Save Denise (succeeded).

Owen, also known as the Wolves Leader or the Alpha Wolf, is a survivor and an antagonist that appears in Season 5 and Season 6 of AMC's The Walking Dead. He is the leader of a large group of raiders known as The Wolves. Although cunning and fearless, he is a savage, cold-blooded, and violent man that is willing to kill and mutilate any innocent person he comes across, even children.

He was portrayed by Benedict Samuel, who also portrays Jervis Tetch in the TV series Gotham.

Almost nothing is known about his life before the outbreak began. He briefly mentions to Morgan that he enjoyed going to the movies. He may have lived in or near Washington, D.C..

During some time in the apocalypse, he formed a group known as the Wolves, and began attacking survivors and raiding establishments where survivors would hold up and taking their supplies for themselves. The group would murder survivors in cold blood, dismember their corpses, carve "W" symbols into their forehead or if they live, bring them back to an establishment known as Del Arno Foods, where they kill them and let them re-animate as walkers and use them for traps against survivors to flush out their supplies.

Sometime between Noah's arrival and departure from Grady Memorial Hospital, the Wolves attacked Shirewilt Estates, killing many of the inhabitants, torching several of the homes and knocking down one of the perimeter walls. They mutilated several of them to add to their collection of walkers for their numerous traps, as evidenced by the pile of severed limbs and torsos just outside the fences, and the reanimated heads with W's carved into them that were piled into a van.

Owen first appears in person when Morgan Jones is cooking breakfast for himself to eat. He comes out from the woods with a gun pointed at Morgan. The two engage in conversation. He tells Morgan that he likes the talk they had, because before he would always meet people, be with them for a while, before cutting them lose. He later reveals he will take everything Morgan has, including his life. When Morgan refuses, he gives a signal to his gang member to attack. However, both of them are knocked out by Morgan and left in a car.

It is not shown what happened to Owen and his teammate after Morgan left him in a car, but he and his partner eventually stumble upon a man with a red poncho, and bring him to the Del Arno Foods cannery where they keep all the walkers with the 'W' carved on their foreheads, and use them as bait for the survivors who are planning to take the foods in a seemingly fruit truck they left on the parking lot. He whispers to the red poncho man to stay quiet and stay still before slashing his throat, saying, "Welcome home".

After resetting the walker traps, Owen rummages through Aaron's backpack that he left behind and observes several photos of Alexandria, Rick Grimes, and his son Carl.

Owen and the Wolves attack Alexandria, but are fought off by Rick's group and the rest of the Alexandrians, resulting in the majority of the Wolves being killed and Morgan letting several of them escape with the intention of saving their lives (these Wolves that escape Alexandria eventually cross paths with Rick Grimes and are all shot dead by him).

As Morgan is searching a home in the safe-zone, Owen ambushes him and tries to kill him with a sickle but Morgan is able to evade his attack. He recognizes Morgan and the two begin to fight. After struggling with Morgan, Owen questions his ability kill people, telling him that he should have killed him in the woods. Owen leaps at Morgan, but he is able to fend him off and beats him with his staff. Owen tries desperately to stab Morgan with his knife but is disarmed. Morgan then apologizes to him and knocks him unconscious with his staff.

Owen eventually regains consciousness, and Morgan elaborates as to why he is unable to kill people by telling him of his past and eventual relationship with Eastman. After Morgan suggests that he could redeem himself as well, Owen reveals that he has a deep gash in his torso. He notes that he will likely not survive his injury, but if he did that he would make it his goal to kill Morgan and everyone else in Alexandria, including the children. To this, Morgan simply leaves and locks the gate behind himself.

Later after Alexandria recovers from the raid conducted by the Wolves, Morgan asks Denise if she has any antibiotics, in which she questions why he asks. Morgan then admits they are not for him, but for Owen locked away in a house.

Carol suspiciously watches Morgan lead Denise to the townhouse with the jail cell (where Owen is being held captive). Carol heads to Jessie's house and asks if she can watch Judith while she takes watch. Carol then goes over to the townhouse and unlocks the door, but Morgan stops her. She demands to know who Morgan is holding in the cell.

Owen is then met by Denise with several medical supplies, the latter sitting on the opposite side of the room. The two share conversation over the atrocities he has committed and Owen reveals that he cut himself while inspecting a damaged vehicle. After initial hesitation, Denise asks him to lift up his shirt, which he does, revealing a horribly infected wound. Denise tells him that he can change and than treats his wound. While this is happening, the massive herd of walkers outside of Alexandria begin to swarm the settlement after the watchtower collapses.

Later, after tricking Morgan, Carol runs downstairs and tells Denise to get away from Owen and prepares to slaughter him. Morgan runs downstairs, staff in hand and tries to dissuade Carol from killing Owen. Carol threatens to kill Morgan if he gets in the way. During the confrontation, Owen shows no fear and admits that he will eventually escape and that Morgan should kill him, and points out that they are all going to die anyway.

Morgan knocks the knife out of Carol's hand and after a struggle, slams her to the ground, knocking her unconscious. While he's distracted, Owen grabs Morgan's staff and strikes him unconscious, then takes a knife and points it at Denise. After cutting his bonds, Denise begs Owen not kill Morgan and Carol, instead he walks up to her and holds the knife to her throat, claiming that she represents what he likes about people. Suddenly, Tara ,Eugene and Rosita enter the cell and the girls point their guns at Owen who orders them to drop them and slide them over. They comply and Owen takes one of the guns and proceeds to walk to the door holding Denise at gunpoint. Tara says he doesn't need Denise and he agrees with her. He then unlocks the door to the building and exits with Denise as his hostage.

After the duo leave, Owen hides away from the walkers passing by, while still keeping Denise at gunpoint. From their hiding spot, Owen and Denise watch walkers stream down the street. Owen tells Denise they'll make a run for a lookout tower as soon as a gap opens up in the herd.

Owen spots a gap in the herd and sprints to the tower with Denise. He defends Denise when walkers attack her but his arm gets bitten in the process. Denise urges him to come with her to the infirmary so she can save his life, presumably by amputating the limb.

He is later seen with Denise, taking shelter inside of a house, where she ties a belt around his arm to amputate it. Denise says that Owen saved her life, signifying his redemption. Both of them run outside, heading to the infirmary. Carol witnesses them running from the townhouse balcony and shoots Owen in the chest, wounding him. He urges Denise to keeping going to the infirmary as he gets devoured by walkers.

Owen is later found reanimated as a walker by Morgan, who apologizes to him one last time before hitting him across the head with his staff, putting him down for good.

Owen is shown to be a cunning, greedy, violent and dangerous person. He appears to care about nothing other than survival for himself by any means necessary and is more than willing to rob and murder other survivors of everything they have. He is shown to be a completely remorseless, cold-blooded murderer as shown when he slits a man's throat with no emotion or hesitation and makes it clear the he is not above killing children either as shown when he threatens Morgan while imprisoned in Alexandria. He is also a sly and calm talker and is shown to possess a very manipulative personality.

Owen seems to view mercy as a weakness as he appears to find it amusing that Morgan refuses to kill other people during their second encounter and openly tells him that he should have killed him when he had the chance to do so in the woods. He appears to be highly intelligent as well, as shown by his ability to devise Walker traps in order to kill other survivors for their supplies and his trivial knowledge of the history of wolves. He also seems to take pleasure in what he and his group do and claims they are doing people a favor by "freeing" them. Owen is somewhat shown to have little to no fear of death as shown during his imprisonment when he appears completely unworried that a potential infection might claim his life.

Owen also appears to be fearless and brave as while imprisoned in Alexandria and at the mercy of Morgan, he shows no fear whatsoever despite having a deep gash in his torso and makes a subtle threat that he still intends to slaughter every survivor in the safe-zone if he survives his wound. His fearlessness is also evident during the confrontation between Carol and Morgan where he encourages Morgan to kill him and shows no fear over Carol's strong intent to kill him. Ultimately he uses the confrontation over his life to knock Morgan unconscious while he is distracted, take Denise hostage and escape from his cell.

Despite his dark and sadistic nature, it is shown that Owen was not a complete monster and was shown to be capable of caring for others as he saved Denise's life instead of fleeing from Alexandria (in which he had a clear opportunity to do so) and before meeting his demise, he urged and helped Denise to escape. 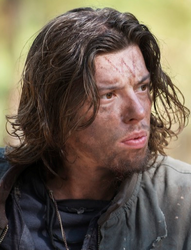 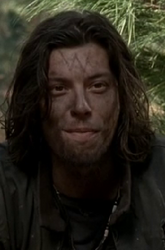 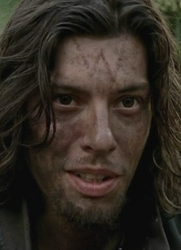 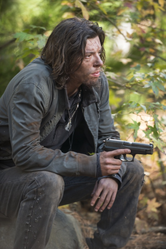 Owen looking through the photos of Alexandria. 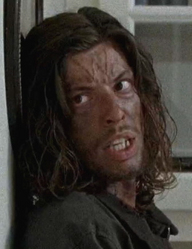 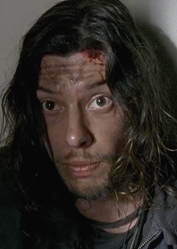 Owen threatens to kill Morgan and everyone in Alexandria if he survives his infected wound. 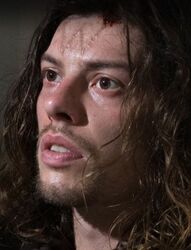 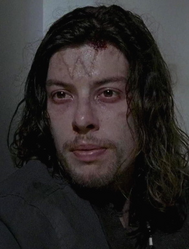 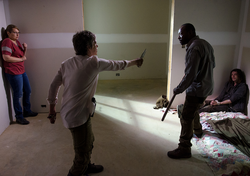 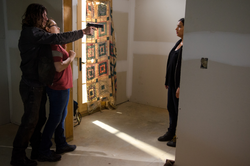 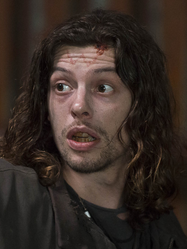 Retrieved from "https://villains.fandom.com/wiki/Owen_(The_Walking_Dead)?oldid=3238592"
Community content is available under CC-BY-SA unless otherwise noted.