Owen Burnett was a supporting antagonist in the animated series Gargoyles and was David Xanatos' right-hand man who also happened to be the mortal alter-ego of the legendary Puck, however due to the fact Puck never revealed his true nature until fairly late in the show it is perhaps easiest to talk about them as separate entities (for more information on his true form please see Puck).

He was voiced by Jeff Bennett, who also voiced Malibu in the same show.

After the queen of the Third Race Titania created the alter-ego of Anastasia Renard, the trickster known as Puck created his own alter-ego in the form of Owen Burnett due to fascination with the concept of such a thing.

Puck modelled the alter-ego after Preston Vogel since he wanted to try his hand at being a serious individual rather than the playful trickster of old.

For a short while Owen Burnett was an employee of Cyberbiotics but found Halcyon Renard far too boring and opted for a partnership with David Xanatos himself, seeing an affinity in the man since Xanatos was a trickster of sorts himself (albeit for very different reasons).

Shortly after entering the service of Xanatos Owen revealed his true form to Xanatos and offered him a choice of a single with from Puck or a lifetime of service as Owen Burnett.

Much to his surprise Xanatos chose Owen's service and the trickster has kept his promise ever since and become the right-hand man of Xanatos.

Owen was responsible for introducing Demona to Xanatos and thus paving the way to the (temporary) alliance that would ultimately awaken the Manhattan Clan.

Even when Xanatos was arrested for receiving stolen goods Owen remained loyal and continued to serve him, frequenting visiting him in prison and aiding in schemes.

Owen was responsible for collecting a sample of Goliath's DNA and also brought Macbeth to the Castle when he offered to remove the gargoyles on Xanatos' behalf. Owen was quick to vent his anger on Macbeth when his battle with the clan damaged the building itself.

Owen also tried to prevent Hudson and the Trio from taking the Grimorum Arcanorum and pulled a gun on them - yet he was no real match for them and taken down rather easily.

When Xanatos returned to the castle Owen remained a key player in his schemes, he was also vital in stopping Demona when she cast a spell to turn all humans into stone at night - revealing that the spell would end "when the sky burns".

Owen was present when Xanatos acquired the Cauldron and Life and helped kidnap Hudson so they could use his stone skin to make a potion that would grant Xanatos immortality.

Although the pair were successful in creating the potion Hudson escaped before they could test it on him.

True to character Owen offered himself as a test subject and dipped his left arm into the potion, which transformed his fist into solid stone - a trait that would remain forevermore.

Owen continued to serve Xanatos after he married Fox and became worried when Alexander was born, knowing that Fox's mother was in reality Titania Owen rightfully feared she would try to kidnap the child.

As a result Owen set up a defensive system in case of such an attempt, which including force-field generators and a new model of Iron Clan robots.

Owen's suspicions were proven right but to his surprise (and fear) it was Oberon that came to spirit Alexander away - Owen was at first reluctant to aid as he knew he had already incured Oberon's wrath as Puck.

However Owen was still very loyal to Xanatos and thus shed his alter-ego in an effort to protect the Xanatos' family.

In the aftermath of this battle Oberon stripped Puck of his powers except when he was teaching or protecting Alexander, trapping the trickster in his Owen persona.

In contrast to the mischievious Puck Owen Burnett is a very serious man who is incredibly loyal to Xanatos - he is also extremely intelligent and cunning, Owen is still a trickster after all.. he has simply altered his style to better suit this new alter-ego and is akin to a master manipulator in his own right.

However Owen would never dream of betraying Xanatos and thus all his considerable brainpower is spent on aiding his amoral master to gain power or stop competition, with the birth of Alexander Owen has also taken on the role of a mentor and guardian (though much of this responsibility lies with Puck rather than Owen himself).

Although Owen does not enjoy getting involved in physical confrontations (after all, why fight when you can have others do it for you?) he can be considered a dangerous opponent as he will fight to the finish to protect the interests of his employer.

Owen is first and foremost a master schemer and by far his most dangerous weapon is his mind - which he can use to frightening effect when needed: as an alter-ego of the immortal Puck it is quite possible that Owen Burnett shares this trait though it can never be known for sure (all evidence seems to point to him at least having some kind of regressed aging).

However while in Owen's form he can not access his magical heritage and thus relies on more conventional forms of combat when he is forced in confrontation, he is a master of judo and has also shown himself fairly useful with firearms.

Following his encounter with the Cauldron Of Life Owen's left fist has been turned to solid stone and he has occasionally utilized said fist to deliver powerful punches to opponents, also due to his high-rank and position of trust Owen enjoys a near limitless supply of resources and contacts by which to further the goals of his master. 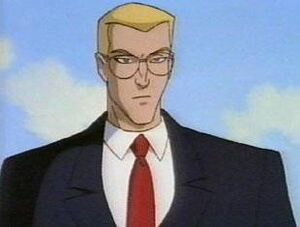 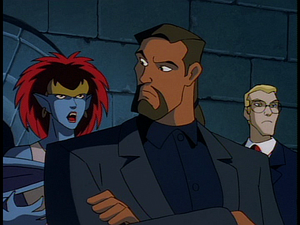 Retrieved from "https://villains.fandom.com/wiki/Owen_Burnett?oldid=4208124"
Community content is available under CC-BY-SA unless otherwise noted.