Experiment with his kills.
Escape the police and the mob of vigilantes (failed).

Owen Porter is a major antagonist in the crime-drama TV series Criminal Minds. He is a 16-year old serial killer who appears as the main antagonist of the Season 5 episode Exit Wounds.

He is portrayed by Mark L. Young, who also portrays Jeremy Downs in Dexter.

Owen Porter was born in Franklin, Alaska. Growing up, his father was abusive, and whenever police were called to look into the abuse, the father forced both him and his mother to cover for him. Likely as a result of his father's abuse, Owen developed psychopathic urges and would hunt frequently, often torturing animals. In school, Owen developed a friendship with an older kid named Joshua Beardsley, bonding over their mutual love for hunting. But their friendship would end when Joshua moved away to Seattle. Owen wanted to follow Joshua to Seattle, but his mother, realizing that he was a psychopath, didn't let him leave. As a result, Owen felt abandoned and alone. One day while out hunting, Owen accidentally shot and killed a man. Liking the feeling of murder, combined with his abandonment issues, Owen began to target and kill people who attempted to leave town.

In 2010, Owen claimed his third victim Brenda Bright, after stabbing her with an arrow. Now, realizing that this is the work of a serial killer, the sheriff calls in the Behavioral Analysis Unit to help profile and track down the killer. However, this proves to be difficult as the whole town is full of hunters. The first night there, technical analyst Penelope Garcia goes out to fix the internet and witnesses Owen stabbing a fisherman near the lodge. Not aware that Garcia doesn't carry a gun, Owen flees the scene.

The BAU eventually believe Joshua Beardsley to be the killer and lock him up for the night to see if the murders stop. During this time, Owen uses the opportunity to kill Josh's mom as revenge for sending Josh to Seattle. Realizing that Josh isn't the killer, but might know the killer due to the personal nature of Carol's murder, the BAU ask him if there was anyone who might've wanted to hurt his mother. Upon thinking about it, Josh realizes that the killer is Owen, but doesn't tell the BAU, and instead plans to take revenge.

The BAU eventually do figure it out, after talking to a school teacher who used to teach Josh. They go to the Porter household, where they talk to the parents, and learn where Owen's heading. Josh and his mob chase Owen through the forest and on to the docks. Owen jumps on a boat, attempting to escape, but is held at gunpoint by Hotch, Reid, and Sheriff Rhodes. The mob arrives and has a stand-off with the authorities, but surrender after reinforcements come from behind. Josh still tries to shoot Owen, but is shot non-fatally in the shoulder by Hotch. Afterwards, though Owen is seen being held in a jail cell, judging by Hotch's words, he was likely institutionalized. 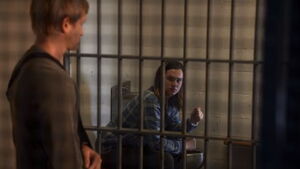