Assist Dalia Margolis in her schemes.

Enigmatic Cracker
Owen Wagner, also known as the Black Hat and Protagonist, is an Elusive Target in HITMAN (2016). He later reappeared as a legacy target in HITMAN 2 (2018).

Wagner was a skilled computer engineer and hacker who was hired by Dalia Margolis and IAGO to serve their plans, until he was assassinated by Agent 47 sent by ICA.

Wagner was a mysterious and shadowy legend in the modern world of information warfare. Being a brilliant computer security engineer, Wagner's unique skills have been linked to several data thefy as well as cybernetic crimes against large corporations for several years.

ICA files linked him to a series of lesser-known hacks in support of the IAGO network. It was not clear whether he was working for IAGO for profit, or whether Margolis had some leverage over him.

It was notable that Wagner had a long-term partner known as "Whitecap", but this individual was not a target. Additionally, intelligence points to the target having a weakness for a particular style of American-brand jam, most likely acquired while at a university in the United States. 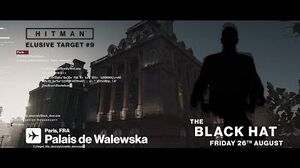 Retrieved from "https://villains.fandom.com/wiki/Owen_Wagner?oldid=3993476"
Community content is available under CC-BY-SA unless otherwise noted.