My Friend (by Vikhor Kuzmin)

Leader of his mercenary company

Agent of the Perseus Spy Network
Member of the Warsaw Pact

Gain more power for his company.

Born in South Africa, Mabuza early years remained obscured until he became an infamous warlord under the nickname "Jackal". Owethu became a ruthless mercenary who would destroy the competition, only recruiting the strong and executing those who deemed as weak. Gaining numerous backers and buyers due to his infamy, Jackal would later be introduced to the Perseus Spy Network, and later became one of their agents in South Africa in assisting Vikhor "Stitch" Kuzmin de-orbit the enemy satellites in Verdansk.

He is voiced by Gabe Kunda, who also voiced Gueldre Poizot in the English dub of Black Clover.

Owethu Mabuza was born on April 18th, 1955 in Mbombela, South Africa, but not much is known about Mabuza or his past. By the 1980s, Mabuza would emerge from obscurity, and gained the nickname the "Jackal" due to his brutal tendencies. Owethu became the head of his own mercenary company, and expanded its reach by destroying rival paramilitary groups in Africa. Jackal seems to have a social darwinist beliefs, as when he destroyed paramilitary groups, he would recruit those who were strong and brutally execute those he deemed weak or not worth his time.

Due to his infamy in Africa, Jackal became connected to numerous backers who supplied his company with better weaponry. According to his in-game bio, the Jackal's origins are ambiguous, and those who know him don't speak of his past, presumably out of fear or respect. During this time, the Jackal's connections would go as far to the Perseus Spy Network, a rogue Soviet group under the command of "Perseus", who contacted the warlord. It's unknown why the Jackal joined the spy network, but it's assumed for more connections to get better weapons and equipment for his company, or simply expand his power in Africa.

The Jackal is mentioned by Perseus agent Freya "Wraith" Helvig when speaks with Stitch, as the CIA team has rescued Russell Adler quickly than expected. Wraith informs Stitch that their man in South Africa is standing by, as he will assist them in destroying the enemy satellites to no interfere with their broadcast.

On June 26, 1984, Jackal is contacted by Stitch to infiltrate the Jumpseat Satellite Ground Station to destroy the enemy satellites that are interfering with the broadcast. Infiltrating the station, Jackal puts Stitch on the line to speak to the civilian, who de-orbits the satellites, resulting in them crashing back on Earth. Once done, Jackal murders the operator with his bare hands without remorse as all of the satellites crash in Verdansk and Algeria. Mabuza's actions allowed the Verdansk test subjects to enter the areas, and secure the satellite's logs while infiltrating these areas. 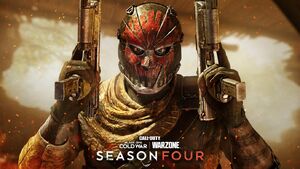 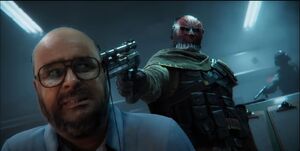 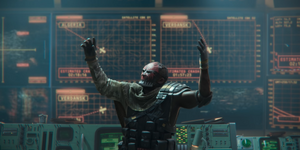 The Jackal upon murdering the satellite operator, relishing in his actions.